Why losing Lindsey Buckingham will haunt Fleetwood Mac for years
By JIM HARRINGTON
The Mercury News
Check Out The Photo Gallery... Photos by: Nhat V. Meyer 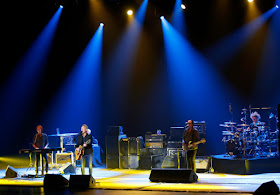 SAN FRANCISCO — Lindsey Buckingham is definitely still on top of his game — even though the game has changed for this Rock and Roll Hall of Famer.

Most notably, the man standing before us on Oct. 9 at San Francisco’s Palace of Fine Arts Theatre is no longer a member of Fleetwood Mac. He was fired from that band in April for convoluted reasons that might, possibly, maybe have something to do with Buckingham not wanting to tour with Mac this year.

Whatever the back story — which is apparently as complicated as pretty much everything else about Fleetwood Mac — the result is that Buckingham is now a full-time solo artist playing intimate theaters, instead of the big sports arenas.

And the change seems to suit him very well.

The Bay Area native’s sold-out show at the Palace of Fine Arts Theatre, which holds just under 1,000 people, served as a brilliant summary of all that Fleetwood Mac lost with Buckingham’s departure. He sounded great on vocals and even better on guitar, as he thoughtfully and skillfully moved through ballads, mid-tempo numbers and real rockers.

Sure, Fleetwood Mac has lined up some pretty amazing replacements — including Mike Campbell of Tom Petty and the Heartbreakers fame, and Neil Finn of Crowded House — for its upcoming tour, which touches down Nov. 21 at San Jose’s SAP Center, Nov. 23 at Sacramento’s Golden 1 Center and Nov. 24 at Oakland’s Oracle Arena. (See www.ticketmaster.com for more information on those shows.)

But there’s no real replacing Buckingham, not when it comes to Fleetwood Mac. There’s just something about his sheer musical intensity, especially on the frets, that lifts that band up to places it could never have originally reached without him. And the firing of Buckingham — who grew up in Atherton — will likely haunt Fleetwood Mac for years to come.

Backed by a solid four-piece band, the singer-songwriter-guitarist came to town in support of the generous new career retrospective, “Solo Anthology: The Best of Lindsey Buckingham,” released by the Rhino Records label.

Like the “Anthology” itself, the nearly 2-hour set was a real treat for big Buckingham fans, covering a broad range of material and including many tunes that the star hasn’t regularly played in recent years. There were a few rough edges to the performance, which shouldn’t surprise anyone since this was only the second show of the tour, but they really didn’t detract much from the overall enjoyment of the 21-song show.

He opened the show with “Don’t Look Down,” one of a half-dozen numbers chosen from his third solo album, 1992’s “Out of the Cradle,” and then followed with strong takes on “Go Insane” and the rarity “Surrender the Rain.”

Some of the best moments of the night came during a solo spotlight, as the rest of the band left the stage and the star of the evening finger-picked his way through stellar versions of “Shut Us Down” and the Fleetwood Mac tunes “Never Going Back Again” and “Big Love.” Buckingham’s playing was jaw-dropping, somehow making his one guitar sound like three as he knitted through one complex rhythm after another.

Of course, the Fleetwood Mac numbers drew big reactions from the crowd, but his solo material held up quite nicely in the mix as well.

The main set closed with a flurry of highlights, starting with “Holiday Road,” the catchy theme to the Chevy Chase vehicle, “National Lampoon’s Vacation,” and then continuing through three straight Fleetwood Mac offerings — “Tusk,” “I’m So Afraid” and “Go Your Own Way.”

It was Buckingham’s second appearance in San Francisco in a five-day period. He also took the stage during Chris Thile’s set at the Hardly Strictly Bluegrass festival in Golden Gate Park on Oct. 5. 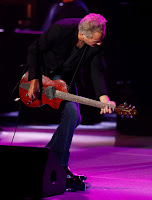