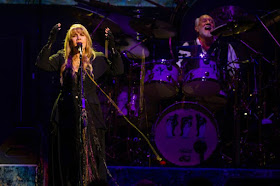 But, with its classic catalog and the core quartet of Stevie Nicks, Christine McVie and the 50-year rhythm section of bassist John McVie and drummer Mick Fleetwood intact, the Mac endures.

That was apparent almost from the instant Fleetwood hit his kick drum to kick off "The Chain," the first of the 24 songs in Fleetwood Mac's nearly 2 1/2-hour show Friday at Pinnacle Bank Arena.

Campbell's bluesy/jangly guitar - instantly identifiable from his work with Tom Petty and the Heartbreakers - gave familiar Mac classics such as "Say You Love Me" a fresh, appealing feel and texture.

And Finn, of Crowded House and Split Enz, is a fine, distinctive from Buckingham-voiced singer, both while harmonizing and taking the lead, which he did for the first time on "Second Hand News."

As promised by Fleetwood when I spoke with him last month, came the first of the songs that revisited early Fleetwood Mac - the Nicks-sung, Peter Green-penned, bluesy "Black Magic Woman" from 1968 that Santana later made a hit.

From 1969 came Green's "Oh Well," with Campbell rock 'n' rolling it up on guitar and his Florida-accented vocal.

The 1970s provided the rhythmic rocking "Tell Me All The Things You Do," written by Danny Kirwan, sung by McVie (who struggled a bit with pitch throughout the night), and 1973, the smoky, Bob Welch-written "Hypnotized," sung well by Finn.

Buckingham and Nicks were in the band when it made "Fleetwood Mac" a couple years later and for 1977's iconic "Rumours" - the albums from which nearly half of Friday's show was drawn.

The breakup songs from "Rumours" had a different resonance as well - from the firing of Buckingham and the lawsuit he filed against the band Thursday.

"This is my first time in your beautiful town. My name is Neil," Finn said before stepping up to sing his Split Enz hit "I Got You." "It's a pleasure to be playing with this band on my first visit."

Given the odds that most of the 10,000 fans in the arena hadn't heard Split Enz, it was followed by a powerhouse, one of Nicks' signature songs, "Rhiannon" - proof that Fleetwood Mac knows how to put together a set.

Crowded House's "Don't Dream It's Over" fared far better than "I Got You," becoming something of a singalong when sung by Finn with his acoustic guitar, joined by Nicks.

The duo stayed in the spotlight for a lovely "Landslide," which Nicks dedicated to two of her best friends, sisters from Lincoln.

The direct connection to Campbell didn't come until the encore - a heartfelt tribute to Petty, on "Free Fallin'," with Nicks' singing and Campbell on the Rickenbacker guitar.

By then, the band had cruised through its set-closing run of "You Make Lovin' Fun," "Gold Dust Woman" and "Go Your Own Way" and on its way to "Don't Stop" - all of which connected with the crowd that had come to hear them, regardless of who was playing and singing.

Not a word was said about Fleetwood Mac's previous PBA appearance - which had to be cut short when Fleetwood was stricken with stomach flu.

But the 71-year-old enthusiastically bashed his way through a percussion solo during "World's Turning" midway through the show as if to say he was back at full strength.

So was Fleetwood Mac, just a little different sounding this time around.


At Lincoln show, Fleetwood Mac goes its own way, plays more than the hits


Even many fans are unaware of the band's material before its hit-filled 1975 breakout. But band namesakes Mick Fleetwood and John McVie have been playing music together since they were teenagers. Fleetwood Mac has more albums from before "Rhiannon" and "Go Your Own Way" than they have from after.

And so alongside "Landslide" was "Hypnotized." Following "Rhiannon" was "Tell Me All the Things You Do."

Some fans might have wanted a few more hits. Still, it was cool to see the band acknowledge its blues-riddled past.

And so Friday for about 10,000 people packed into Pinnacle Bank Arena, they reached way back and pulled out some classic Fleetwood Mac tunes and a couple of covers to complement the smash hits that eventually landed them in the Rock & Roll Hall of Fame.

Though the band largely played well - singers in their 70s can't hit the high notes quite the same as they used to - the absence of Lindsey Buckingham was palpable.

It wasn't quite right hearing the band without the singer, songwriter and guitarist responsible for some of its greatest songs.

When he departed - or was he asked to depart? - they turned to two musicians to take his place: Crowded House and Split Enz singer/guitarist Finn and Tom Petty and the Heartbreakers' guitarist Campbell.

With respect to the talented Finn, his voice doesn't fit Fleetwood Mac's biggest hits quite like Buckingham's. When he took lead on "Second Hand News" and "Go Your Own Way," the songs were just a bit off.

That's not on Finn. He's fantastic in his own right. It's simply that Buckingham wrote those songs. He sang them. Those are his.

(Finn definitely nabbed the spotlight on his Split Enz song "I Got You," his Crowded House hit "Don't Dream It's Over" and an update of the 1970 Fleetwood Mac jam "Tell Me All the Things You Do," among others.)

Campbell was phenomenal. He's one of the best guitarists ever and, without his other band, Fleetwood Mac is a good fit. (Nicks has often said that the Heartbreakers are her favorite band of all time, and she often asked Petty to join.)

Campbell was particularly well-suited to play those old blues jams, and he owned his guitar parts. Campbell made songs like "Black Magic Woman" (popularized by Santana but originally a Fleetwood Mac song from 1968) his very own. Paired with Nicks on vocals - it seems like that song was written just for her - it made for a great take on an old familiar song.

But it was the band's biggest songs - Nicks singing "Landslide" while holding a tambourine emblazoned with bright scarves and the entire band hammering out "Don't Stop" - that were the best received. (Oh, and an absolutely killer cover of "Free Fallin'" dedicated to Petty.)

"We traveled a long way to be here tonight, and it's so good to see you all out there," Campbell said.
"Thank you, Lincoln," Christine McVie said. "You guys are fantastic."