STEVIE NICKS Nominated For Induction Into The Rock & Roll Hall of Fame!

Stevie Nicks, The Cure Among 15 Acts Nominated For Rock & Roll Hall Of Fame 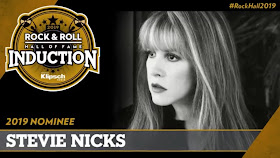 The Rock & Roll Hall of Fame announced its 2019 nominees on Tuesday, and in what has become an annual tradition, the list came with the Hall's usual heap of opacity and a dash of acrimony.

One nominee has already been inducted, two are receiving their fifth nominations, and one previously said it would decline the honor before changing its, ahem, tune on Tuesday morning.

Stevie Nicks is nominated for induction for the first time as a solo artist, having previously been welcomed into the Rock Hall in 1998 as a member of legendary rock group Fleetwood Mac. If she makes the cut when the 2019 class is announced in December, Nicks will become the first female artist to join the Hall a second time.

Starting Oct. 9, the public can visit rockhall.com/fanvote to cast their votes for who they would like to see in the Class of 2019. Voting ends Dec. 9 and the top-five artists will make up a fan's ballot, which counts as a single vote.

VOTE: Go to rockhall.com/vanvote for fan vote. You can vote once per day.  Below are some early stats as of this posting... But it's early, we gotta stay on top of this. 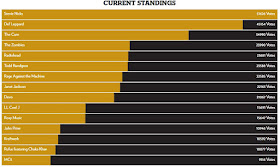 In alphabetical order, this year's nominees for the Rock & Roll Hall of Fame are: