FLEETWOOD MAC STILL GOING THEIR OWN WAY, 51 YEARS ON...


After 51 years, Fleetwood Mac are still pop’s biggest soap opera. The latest episode finds one of the main characters, Lindsey Buckingham, being sacked by the others (among them an ex of his). He responds by suing them for $14 million, the amount he says he would have made from this tour, which I caught in Canada (it arrives at Wembley Stadium on June 16 next year). 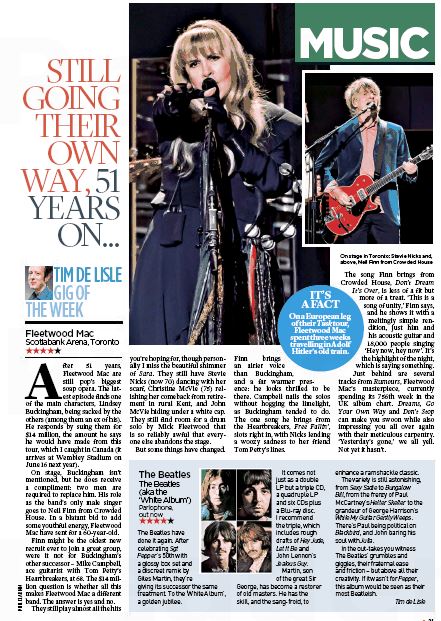 On stage, Buckingham isn’t mentioned, but he does receive a compliment: two men are required to replace him. His role as the band’s only male singer goes to Neil Finn from Crowded House. In a blatant bid to add some youthful energy, Fleetwood Mac have sent for a 60-year-old.

Finn might be the oldest new recruit ever to join a great group, were it not for Buckingham’s other successor – Mike Campbell, ace guitarist with Tom Petty’s Heartbreakers, at 68. The $14 million question is whether all this makes Fleetwood Mac a different band. The answer is yes and no.

They still play almost all the hits you’re hoping for, though personally I miss the beautiful shimmer of Sara. They still have Stevie Nicks (now 70) dancing with her scarf, Christine McVie (75) relishing her comeback from retirement in rural Kent, and John McVie hiding under a white cap. They still find room for a drum solo by Mick Fleetwood that is so reliably awful that everyone else abandons the stage.

But some things have changed. Tusk Finn brings an airier voice than Buckingham, and a far warmer presence: he looks thrilled to be there. Campbell nails the solos without hogging the limelight, as Buckingham tended to do. The one song he brings from the Heartbreakers, Free Fallin’, slots right in, with Nicks lending a woozy sadness to her friend Tom Petty’s lines. The song Finn brings from Crowded House, Don’t Dream It’s Over, is less of a fit but more of a treat. ‘This is a song of unity,’ Finn says, and he shows it with a meltingly simple rendition, just him and his acoustic guitar and 18,000 people singing ‘Hey now, hey now’. It’s the highlight of the night, which is saying something. Just behind are several tracks from Rumours, Fleetwood Mac’s masterpiece, currently spending its 756th week in the UK album chart. Dreams, Go Your Own Way and Don’t Stop can make you swoon while also impressing you all over again with their meticulous carpentry. ‘Yesterday’s gone,’ we all yell. Not yet it hasn’t.
Nickslive at Sunday, November 11, 2018
Share