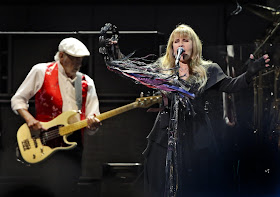 Lindsey Buckingham may have gone his own way, but the guitarist’s absence didn’t stop Fleetwood Mac’s other members from carrying on as if he never existed in the first place.

He got the sack in April, before the band’s “An Evening With Fleetwood Mac” tour began in October — reportedly due to differing opinions on the set list — and two last-minute additions filled his spot during Wednesday’s packed show at Nationwide Arena.

Neil Finn, wiry lead singer of 1980s Australian rock band Crowded House, took the lead on classics such as “Go Your Own Way” and “Second Hand News” with the pure voice of a Westminster Abbey choir boy.

Aside from those and another one-off single or two, the 11-person configuration stuck to songs sure to please the (mostly) above-50 crowd.

Stevie Nicks — whom drummer Mick Fleetwood introduced as “our eternal romantic” — didn’t attempt to reach the high notes on “Rhiannon,” the fifth single off the group’s self-titled 1975 album, but her lower register resonated clear and full.

Standout hit “Landslide,” which she sang to Finn’s acoustic strumming, saw her voice warmed up enough to elicit tears from the woman next to me.

If Nicks is a black-clad, whirling dervish of a moon, Mick Fleetwood and his yellow drum kit were the evening’s sunshine.

Sweating profusely in an outfit akin to a Revolutionary War uniform, the band’s sole original member took a minutes-long interlude during “World Turning” to charm the crowd with his British accent and oddball facial expressions.

“You should never leave a drummer alone. You know why?” he asked while pounding solo onstage. “Because he’s going to unleash the hounds!”

Substantially less sanguine keyboardist Christine McVie scratched somewhat when reaching for top notes on a perky “You Make Loving Fun” and too-mellow “Say You Love Me,” but she committed to staying true to each track as recorded.

McVie’s former husband (and longtime bass player) John McVie stayed quiet behind her, unleashing his loudest contribution on opening song “The Chain,” which could have been ripped straight off 1977′s “Rumours” record.

Rarely, in fact, did the group reimagine any of its hits.

A Nicks-led rendition of “Black Magic Woman” gave a feminist twist to the lyrics, and a blues-leaning bent to the music.

Otherwise, Fleetwood Mac’s members leaned into nostalgia, right down to the ceaseless bickering that left it one man down.