Concert review: Fleetwood Mac brought Nationwide Arena back to the ‘80s
By Claire Kudika
Photo by Casey Cascaldo
The Lantern 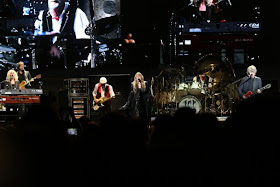 Fleetwood Mac performed at Nationwide Arena Wednesday night with the same energy I imagine they had back in their glory days in the 1980s.

A lot of the show was reminiscent of the era when the band skyrocketed to fame: the cheesy and cliche visual graphics, ranging from horses galloping along the ocean coast to a black and white rose losing its petals; the band member’s attire; and the rush from one song to the next. However, all of it fit Fleetwood Mac’s folky and kitschy brand so well, nobody minded at all.

Opening with classic hit “The Chain,” Fleetwood Mac gripped the room and did not let go until the lights went off for good.

The crowd was screaming every word and dancing for over two hours while the band was on stage.

Although Stevie Nicks is arguably the most well known member of the band, all the members of Fleetwood Mac engaged with the audience equally.

That being said, most of the high points of the show did involve Nicks. While bassist John McVie was performing “Don’t Dream It’s Over” alone on stage, Nicks came back up to finish the song as a duet, and the crowd immediately became re-engaged.

Nicks herself admitted that the hauntingly beautiful duet of “Don’t Dream It’s Over” would be a tough song to follow, but as the renowned “white witch,” she managed to do it. After thanking the crowd for following the band for so many years, she launched into “Landslide.”

Only Nicks and guitarist Neil Finn were on stage to perform “Landslide.” The stage was dark and the crowd was hushed. The intimacy of a gigantic arena like Nationwide rivaled some of the smallest venues I’ve ever been in. It was bone chilling, and haunting and everything you would expect Fleetwood Mac to bring to the table.

More highlights of Nicks’ vocals came in the form of “Rhiannon,” “Everywhere” and “Gypsy.” But my favorite moment was when Nicks finally did her signature shawl twirl during “Gypsy.”

However, Nicks was not the sole singer on stage. Christine McVie had her fair share of mic time as the primary singer, and brought the same high-paced energy as Nicks, with hits like “You Make Loving Fun,” “Isn’t it Midnight” and “Little Lies.” Guitarist Mike Campbell was also solo on vocals during early Fleetwood Mac-era song “Oh Well.”

Drummer Mick Fleetwood even had a 10-minute solo while the rest of the band was offstage.

The show was ultimately a group performance, and the ease which with they played and shared the stage together made it obvious that this was a veteran group of performers. They were not onstage to be cool or to convince the crowd to like them; they were onstage because it’s what they love to do.

The band left the stage for the final time with a simple bow—it was more of a whimper than a bang. Compared to concerts by more modern musicians, it was a very quiet farewell. Again, it seemed very fitting for the band.

Even though they have not evolved with concert fads in the form of seamless graphics and flashy costumes, the members of Fleetwood Mac don’t really need modern visual spectacles to still put on an exciting and emotional show.
Nickslive at Sunday, November 11, 2018
Share