Rock n’ roll was very much alive and well last night in Toronto’s Scotiabank Arena for one of all-time’s most classic bands, Fleetwood Mac, who now date back fifty years with the release of their self-titled debut album in 1968. It was a rare experience to be apart of the sold out arena welcoming the band to its sixth decade.

The now eleven-person touring band featured four-fifths of the traditional lineup, including rock goddess Stevie Nicks, keyboard songstress Christine McVie and her husband John on bass, as well as ponytail sportin’ namesake drummer, Mick Fleetwood. Original guitarist and vocalist, Lindsey Buckingham, was fired from the band in April 2018 and was replaced with Crowded House’s Neil Finn as well as Tom Petty and The Heartbreakers’ Mike Campbell.

The band opened their impressively lengthy 130-minute set with “The Chain” from their 1977 hit album Rumours, and at the very first note the fans let our a roar of excitement and appreciation. While the audience spanned multiple generations, it became one of those crowds who couldn’t decide whether to sit or stand, not unlike a Catholic Church service.

As Fleetwood Mac made their way through a songbook of hits like “Little Lies,” “Dreams,” and “Landslide,” one of the most interesting elements was how each song had a different arrangement of band members. Of course at the centre of the stage was Stevie Nicks who not only grasped you with her iconic singing voice, but also her powerfully feminine charisma. She often swayed about in her black robe mesmerizing like a gypsy.


During “World Turning,” the 71-year-old, Mick Fleetwood, took on a 10-minute drum solo, proving he can still hang with the kids, as he rolled through tom-tom rhythms alongside touring percussionist Taku Hirano, who furiously smacked on the bongos. Fleetwood accompanied his drumming with jungle like screams as well as his signature wide eye stare.

One of the best highlights of the night came when most of the band cleared the stage for Finn to perform “Don’t Dream It’s Over” which he wrote for Crowded House. The arena lit up with cell phone lights as Finn dove into the first chorus. Halfway though the song he was joined by Nicks who finished the song with him as a duet – A rare and spin-tingling moment to say the least.

The main set came to a climactic conclusion with an inspiring performance of Fleetwood Mac’s biggest hit and one of the greatest rock n’ roll songs of all time, “Go Your Own Way.” For this moment, it was not hard to decide whether to sit or stand. In fact, it was nearly impossible to stay off your feet. The arena echoed with applause for several minutes after until the band returned for an encore.

Fleetwood Mac would kick off the encore with an emotional cover of “Free Fallin’” with Nicks paying tribute to Tom Petty on vocals. Slideshow images of Petty with the band members appeared above them. By the end of the song, Nicks was on the verge of tears as she expressed her thanks to be able to sing the legendary song on his behalf.

The ever-catchy greatest hit “Don’t Stop” also graced the encore for one last dance-happy sing-a-long. The night then concludedwith a beautiful duet of Nicks and McVie singing “All Over Again.” It was truly phenomenal to experience one of rock music’s all-time greats still performing at top-level, surrounded by an arena full of people, traversing multiple generations, in attendance to appreciate it. 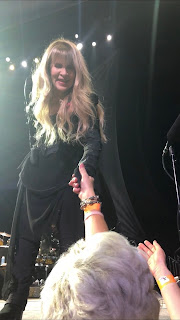 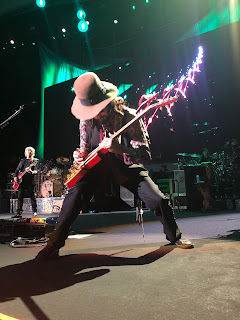