WERCHTER BOUTIQUE FESTIVAL
On Saturday 8 June the Werchter Boutique Festival celebrates the best in pop music. Fleetwood Mac, the day's headliner, has held the patent on pop for over fifty years. The legendary band is planning a handful of gigs in Europe next summer and we are honoured to welcome them to the Festivalpark in Werchter. The tour will feature the newly announced line-up of Mick Fleetwood, John McVie, Stevie Nicks, and Christine McVie along with newcomers Mike Campbell and Neil Finn. 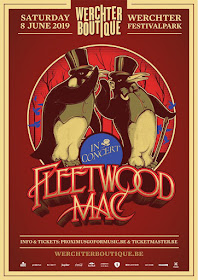 Tickets to Fleetwood Mac at Werchter Boutique go on sale on Friday 9 November at 10 am via proximusgoformusic.be and ticketmaster.be.

PINK POP
It was also announced today that Fleetwood Mac will close the fiftieth edition of the Pinkpop festival next year on June 10th in Landgraaf, Netherlands. Tickets on sale Saturday, March 16, 2019 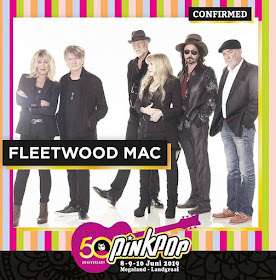