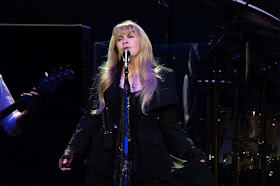 Right off the bat, the band opened with one of their greatest songs, “The Chain.” A song that would sum up the drama of the group’s early days, and set the tone for many, many more years of conflict, heartbreak and forgiveness.

Nicks was, in a word, enchanting. But even though she was no-doubt the most popular of the group, each member of the band got to shine in the spotlight.

The biggest news of this tour was that usual singer-songwriter and guitarist Lindsey Buckingham wouldn’t be joining the rest of the band. This is just another chapter in the long-running, career-defining drama-fest that is Fleetwood Mac. But honestly, Buckingham wasn’t missed. Instead of replacing him with session musicians and having the remaining key members of the band get all the attention, the group opted for Crowded House frontman Neil Fynn and, of course, iconic guitarist and former Tom Petty and the Heartbreakers member Mike Campbell.

What a pleasure to once again see Campbell on stage. After the passing of Tom Petty last year, it was uncertain when the Heartbreakers guitar legend would shred it in front of a stadium-sized live audience again. The additions of Fynn and Campbell set the tone for ‘An Evening with Fleetwood Mac’—projecting themes of friendship, nostalgia and mastery.

Mick Fleetwood was as energetic, crazy and loud as ever, toying with the audience and bouncing around in his red shoes. Nicks had obviously recovered from her voice issues, because that voice was in fine, pristine form all throughout fan favourites “Rhiannon,” “Landslide,” “Gypsy,” and many, many more. Her biggest performance of the evening would come with “Gold Dust Woman”—for which she donned a glittering gold shawl and contorted, danced and flailed around the stage in true witchy form.

Refreshingly, Fleetwood Mac went back to the original days of the band—before Buckingham and Nicks joined—to offer up some 1960s blues courtesy of original frontman Peter Green. The audience ate it all up happily.

After a 15-year hiatus from Fleetwood Mac, Christine McVie was back on vocals and the keyboards. While it was beautiful to see her, and to hear McVie classic like “You Make Loving Fun” and “Everywhere” sung by the original voice, that voice has not quite held up. Not that that isn’t to be expected after so long away from the grind of band life.

Meanwhile, Fynn’s voice more than suited classic Buckingham-centered pieces like “Go Your Own Way” and “Don’t Stop.” If audience members were uncertain of who he was, they sure as hell figured it out when he dove into an acoustic version of his mega 80s hit “Don’t Dream It’s Over.” Nicks eventually joined him, and it was one of the most special moments of the evening.

The first song of the encore was, fittingly, Tom Petty’s “Free Fallin’.” Nicks sang the iconic song as a photo montage of Petty rolled on the big screen. Many of those photos included Campbell and Nicks at various stages of their lives. Nicks’ powerful friendship with Petty—both collaborative and personal—has been one of the most defining relationships of her career. It was extra special to see Campbell—Petty’s right-hand stage mate for so many years—playing along old friend Nicks. In a way, this homage to a classic rock n’ roll figure was one of the more impactful ones seen at Rogers Arena in recent years. There were more than a few tears, and Nicks certainly shed some.

It is lovely to see that Fleetwood Mac is by no means passé. Nicks has certainly entered a point in her career where she is revered by all ages and is very much still in fashion. In fact, just last year she performed a duet with Lana Del Rey for “Beautiful People Beautiful Problems” (on Rey’s Lust for Life album), blowing the minds of millions of ‘good witch’ super-fans all over the world

Wednesday night proved that some bands and some songs just simply last. 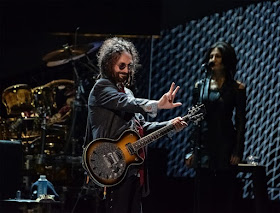 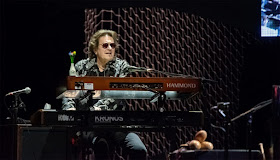