A revved up, magical, and vital Fleetwood Mac brings a different kind of drama to Rogers Arena in Vancouver
by Janet Smith
Straight.com
Photo: Rogers Arena 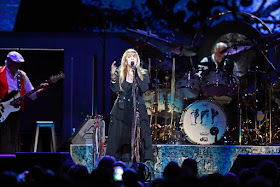 Drama has always been a part of Fleetwood Mac's mystique—from the romantic rifts that fueled Rumours right up until this year, when long-time singer-guitarist Lindsey Buckingham departed the band with the usual acrimony before its tour. Was he kicked out, or did he leave voluntarily in a huff? That's bound to be cleared up by the ongoing lawsuit.

But the epic Vancouver tour stop here last night at Rogers Arena was all about the love and good vibes. From the opening kick-drum tick of “The Chain”, it was clear the band was eager to go their own way without Buckingham, adding Crowded House frontman Neil Finn and former Tom Petty and the Heartbreakers guitarist Mike Campbell to the mix. And the crowd—a wild mix of ages, from kids in Rumours T-shirts to moms in their best feathered top hats to old dudes with canes—went gamely along for the ride.

Everyone on-stage was having a complete ball, gleeful drummer Mick Fleetwood smashing away like Animal without the aggro, the hulking timekeeper shown in closeup-cam via projections from multiple angles. As he tore through an insanely extended drum solo in “World Turning”, he repeatedly asked, “Are you ready to release the hounds?” Met with the crowd's screaming “Yes!”, Fleetwood then proceeded to do so on his kit.

It was easy to forget that the hyperenergized 71-year-old helped found the band no less than 50 years ago—as in five freaking decades. At the end of the concert, long after the ovations for fittingly upbeat show closer “Don’t Stop” had died down, Fleetwood took the stage in his jaunty black knickers, red shoes, and scarlet top hat to plead with the crowd heading up the aisles of Rogers Arena to simply "be kind” to one another.

Fleetwood’s manic energy was matched by Stevie Nicks’s Gypsy splendour, the songstress fondling the streamers hanging off her microphone and tambourine as she sang, and wrapping herself in a glimmering gold shawl for showstopper "Gold Dust Woman". Spinning magically in her full black skirt and black-suede platform boots, she looked preternaturally young.

For his part, though he didn’t bring the loaded history Buckingham would have had with the others on-stage, Finn managed a nice balance of achieving the Mac-veteran’s tone while somehow still making the songs his own. He also treated fans who lived through the '80s to his own acoustic Crowded House ballad “Don’t Dream It’s Over”, in a transcendent duet with Nicks—another of the show’s feel-good moments.

Campbell, meanwhile, brought the necessary chops to the guitar work, not to mention gravitas to the encore’s "Free Fallin’", sung by an emotion-drenched Nicks and set against projections of the late Tom Petty.

For die-hard fans, the band dug deep into its vaults, back into the bluesy '60s under original frontman Peter Green. Christine McVie—back in the fold after a 15-year hiatus from the group—held her own on the keyboards, and gave most of the room a new appreciation for the '80s radio hit “Little Lies”.

The biggest highlight of a show that didn't lack them came midway through, and we don’t have to tell you which song it was. Nicks was as bewitching as ever in “Rhiannon”, spreading her black shawl like wings and throwing a spell over the packed arena.

In the process, she brought something magnetically older and wiser to the catharsis that's long been part of Fleetwood Mac's storied run. So, yeah, maybe there was drama after all.