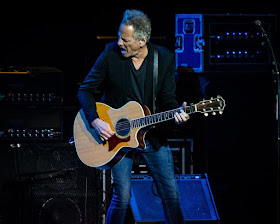 2018 was a year featuring highs and lows for Lindsey Buckingham.

While word didn’t start to trickle out publicly until April, Buckingham was fired from Fleetwood Mac in January, making his performance with the group on January 26th at a MusiCares benefit his final one. It marks his second departure from the group he joined in 1975 following a sabbatical from 1987 to 1997.

On October 5th, Rhino released Buckingham’s first ever Solo Anthology, featuring material from all six of his solo studio albums, plus a pair of unreleased tracks and one cut from his 2017 album with Fleetwood Mac’s Christine McVie.

But not even a week removed from that release, it was reported Buckingham was suing his former band for breach of fiduciary duty, breach of oral contract and more.

One of the issues reportedly at the center of the acrimonious split was his desire to book solo shows on off nights of the Fleetwood Mac arena tour.

Buckingham brought that solo tour, what he’s often dubbed “the small machine,” to Ann Arbor at the Michigan Theatre, where he was backed by a four-piece band Saturday night.

“We are here for… a couple of reasons,” said Buckingham on stage Saturday, tongue-in-cheek, addressing the crowd with a pause for emphasis near the start of the show. “The important one is that Warner Brothers has put out an anthology of my solo work. The whole process of curating it was a catharsis. In celebrating this package, we get to celebrate some material that has never been performed on stage,” he said, before heading into “Surrender the Rain,” from his 1992 album Out of the Cradle.

From his 1981 solo debut, “Trouble” provided a terrific example of just how great Buckingham’s deliberate finger picking remains as he headed toward a full band take of “I Must Go,” featuring wonderful backing vocals from both his bassist and keyboard player.

Buckingham remains in terrific voice and “Street of Dreams” was an early highlight Saturday in Michigan as he moved to the acoustic-electric for a solo take on the track in the theater setting.

“We are making a new start,” said the guitarist in another general nod to his Fleetwood Mac departure, both a situation and band that, amidst litigation, he’d never directly reference. “It’s very important to have you here at the beginning of something new. We have lots more down the line,” he continued, addressing his future obliquely.

Those words acted as Buckingham’s introduction to a solo rendition of “Shut Us Down.” But “Oh you and I we sure can dream / of conversations that might have been,” are the lyrics that actually begin the song. For Buckingham, who claims he was never given a reason for his Fleetwood Mac firing by any of his bandmates, despite inquiries, the placement of that song, at that particular point in the set, following said introduction, was probably not coincidental.

It was a point further driven home with a solo take on Fleetwood Mac’s “Never Going Back Again” immediately following.

At that point, the show began to hit its stride. Buckingham’s band is tight but the best moments Saturday in Michigan were those which placed the greatest emphasis on his delicate playing and introspective lyrics in a far more intimate setting than Fleetwood Mac fans are generally accustomed.

While he may have never directly addressed his former band, he had no problem diving into that catalog, as the solo portion of the show continued with his stunning take on Fleetwood Mac’s “Big Love.”

From 1987’s Tango in the Night, the song’s glossy production on that record hasn’t aged well. But treated as the Buckingham solo spectacle that it often was during Fleetwood Mac tours, “Big Love” was every bit as engaging in a small theater as it was many nights in an arena, with Buckingham’s classical picking of the acoustic guitar stealing the show Saturday night in Ann Arbor.

As the band made its way back to the stage, Buckingham appeared not just energized but comfortable, interacting with his keyboard/acoustic guitar player during “Slow Dancing” and jovially messing around with his bassist.

But the biggest smiles were saved for a seasonally appropriate rendition of “Holiday Road,” the solo Buckingham cut most well-known for its placement in the 1983 Chevy Chase film National Lampoon’s Vacation and subsequent sequels. The guitarist laughed and kicked throughout, drawing the crowd to its feet, as the show headed for the close of the main set with rollicking takes on Fleetwood Mac classics like “Tusk” and “Go Your Own Way.”

“Thank you so much,” said Lindsey Buckingham Saturday in Michigan. “We’re making a new album next year and we’ll be back. We love you all so much for being a part of this so early on,” he continued, making the most of his unexpected new chapter.

“If I play something and you recognize it, just stop me,” he joked, referencing the upcoming February 1 release of his debut solo album Tales of America. “When the record comes out, I’m gonna come back and quiz you,” he continued.

Songs like “My Heart is Never on Time” and closer “Saying Goodbye” set the stage beautifully Saturday in Ann Arbor not just for a headlining set by Lindsey Buckingham but for Ondara’s new record as well.

“If you’re concerned that this next song is going to be sad, it’s ok because the next show is a rock show,” observed Ondara. “It’s a nice lyrical contrast.”
GO YOUR OWN WAY