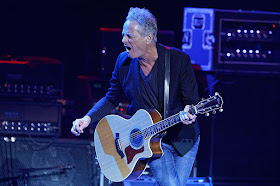 
ANN ARBOR -- One door closed on Lindsey Buckingham this year -- and hit him on the butt on the way out.

Now he's ready to open another one.

That was the message of the Rock and Roll Hall of Famer's concert Saturday night, Nov. 18, at the Michigan Theater. Fired by Fleetwood Mac earlier in the year, he's responded not only with a lawsuit against the band but a purposeful renewal of his solo career, including a compilation of what's come before, and promises of much more to come. "You are here at the beginning of something new," Buckingham told the Ann Arbor crowd mid-show. "We have lots more down the line...We're looking forward to having time to do all that."

Though he played some of the group's material, Buckingham did not mention the turmoil with Fleetwood Mac -- who he spent 42 off-and-on years of multi-platinum success with -- or even the band superficially during the nearly two-hour, 21-song show; The closest he came was while discussing the "Solo Anthology: The Best of Lindsey Buckingham," when he noted that he "likes looking ahead and not behind -- that's certainly served me well this year." But his song choices were clearly statements of purpose, including a solo acoustic pairing of "Shut Us Down" and Mac's "Never Going Back Again."

And he ended the night with the pointed and potent choice of his 2008 solo track "Treason," whose chorus declared, "Deep down there's freedom...We will rise from this treason."

Mostly, however, Buckingham and his tight four-piece band gave every reason to anticipate good things to come from his new path. Saturday's show offered an insightful and, to some, revelatory showcase for the creative inventiveness and even quirkiness that's made him one of the standout pop auteurs of the past four decades. For guitar fans in particular it was a festival of finger-picking dexterity as Buckingham -- in his trademark black jacket, black T-shirt and blue jeans -- simultaneously played leads and rhythms on both acoustic and electric, driving songs such as "Go Insane" and a solo acoustic "Big Love" into frenetic fury. Fleetwood Mac's "I'm So Afraid" was its usual epic discourse, with Buckingham slapping his guitar and mugging for ebullient fans who lined the front of the stage.

And the Mac's "Go Your Own Way" was a soaring, triumphant anthem with an extended solo at the end.

The show also let Buckingham dig deep into his solo catalog for songs he noted were seldom played, including shimmering gems such as "Surrender the Rain," "Not Too Late" and "Soul Drifter," the stomping angst of "Doing What I Can" and the gentle, bluesy "Street of Dreams" and the disco-flavored "Slow Dancing." "Holiday Road" from the "National Lampoon's Vacation" series was a roaring rockabilly set-up for a spirited romp through the Mac's "Tusk," while "Turn It Down" nodded to New Wavey pop.

During his comments Buckingham promised a new album and vowed to "see you again next year." And with Saturday's show he gave every reason to anxiously await both.