Stevie Nicks GOES HER Own Way

Stevie Nicks GOES HER Own Way 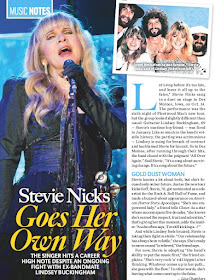 
"Let’s stop before it’s too late, and leave it all up to the fates,” Stevie Nicks sang in a duet on stage in Des Moines, Iowa, on Oct. 14. The performance was the sixth night of Fleetwood Mac’s new tour, but the group looked slightly different than usual: Guitarist Lindsey Buckingham, 69 — Stevie’s onetime boyfriend — was fired in January. Like so much in the band’s volatile history, the parting was acrimonious — Lindsey is suing for breach of contract and has blamed Stevie for his exit. So in Des Moines, after running through their hits, the band closed with the poignant “All Over Again.” Said Stevie, “It’s a song about surviving change. It’s a song about the future.”

GOLD DUST WOMAN
Stevie knows a lot about both, but she’s focused only on her future. Just as the new tour kicked off, Stevie, 70, got nominated as a solo artist for the Rock & Roll Hall of Fame, and made a buzzed-about appearance on American Horror Story: Apocalypse. “She’s one empowered lady,” a friend tells Closer. As a star whose success spans five decades, “she knows she’s earned the respect, trust and adoration,” that’s giving her this moment, adds the insider. “As she often says, ‘I’m still kicking a--!’ ”

And while Lindsey feels bruised, Stevie is taking their fight in stride. “Our relationship has always been volatile,” she says. She’s ready to move on and “is relieved,” the friend says.

For now, Stevie is adopting “the band’s ability to put the music first,” the friend explains. “She’s very rock ’n’ roll hippie in her thinking. Whatever comes up in her path… she goes with the flow.” In other words, she’s leaving what comes next up to the fates.