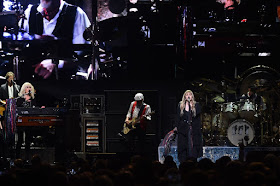 
The Chain was supposed to keep them together, wasn’t it?

But, in the buildup to the current tour, it broke over what appears to be a fairly petty argument and now we’re in the midst of the ultimate Fleetwood Mac drama.

It didn’t stop the 11-piece band that showed up at the PPG Paints Arena Thursday from starting the show with “The Chain,” one of the signature songs of frontman Lindsey Buckingham, who is currently suing his old mates.

Their “take that, Lindsey!” moment put them in the position of sounding like a Fleetwood Mac tribute band from the outset, albeit with a pair of well-respected ringers in Neil Finn (from New Zealand’s Crowded House) and guitar hero Mike Campbell (from the Heartbreakers). Finn has a pleasant voice similar in tone to Buckingham but without the angry edge.

Despite the sold-out crowd seeming perfectly excited by it, it struck me as a rough start and had me immediately missing the plaintiff.

But then, there’s Stevie Nicks, the real drawing card, the one who has fans dressing up in black, lacy clothes. Sometimes it takes a minute for her to warm up those husky pipes, so “Dreams” was a little uneven. That went with a fairly flat “Little Lies” from Christine McVie at the keyboards, Finn doing Lindsey again on “Second Hand News” and Campbell, though very solid, making us pine for Santana on “Black Magic Woman,” reclaimed on this tour by Fleetwood Mac from the Peter Green days.

Shortly after that, though, Nicks was ready to take over the show, starting with a stunning, hard-rock version of “Rhiannon” driven by her fiery vocal. That she is 70 is a miracle...of something.

Her momentum was briefly interrupted by an intermission in the form of Mick Fleetwood’s maniacal 15-minute drum and hollering solo at the end of “World Turning,” ably assisted by percussionist Taku Hirano.

Nicks returned with a lovely “Gypsy” and then handed the stage back to the “two gentlemen [introduced] into this crazy band.” Campbell did a rare vocal turn, kind of a talk-sing, on “Oh Well,” the killer blues-rock song that first put Fleetwood Mac on the radar in the late ‘60s.

Finn’s evening highlight was a beauty. “This is a song of unity and I’d like to dedicate it to the grieving families of Squirrel Hill and Pittsburgh throughout...my heart goes out,” he said, introducing a very pretty version of Crowded House’s “Don't Dream It's Over” with lighters and cellphones all aglow.

Then, Nicks did her part for the healing.

Before a screenshot of the city skyline lined with candles, she said, “My mom always told me, ‘Stevie, you’re on a mission, you’ve always been on a mission, and your mission is to go out into the world and sing your songs and try to make people better when they need somebody to come sing something that will just take them away for maybe one moment in time.’ … I have a favorite phrase that’s called being a spiritual warrior …

“What I want you to know is, we are so sad for you,” she said, choking up, “and there’s nothing to say, except that, you know, they can’t win, and you will come around and your spiritual warriorness will take over at some point and you will get better. So, I’m going to dedicate this song to you like we have so many times in times of trouble -- after 9/11 and after, we went into Boston the day after what happened in Boston, and so it always seems we end up coming in these times. It’s called ‘Landslide,’ it’s for you.”

She poured all that emotion into the melancholy ballad, cheered by her faithful along the way. A few songs later came her show-stopping moment on “Gold Dust Woman,” complete with her gypsy shawl dance and an impassioned climax channeling pain and rage while wailing lines like “you should see me now” and “you can’t shake me down.”

McVie, by contrast, brought her cool delivery to “You Make Loving Fun” and the deep cut “Isn’t It Midnight.” The main set climaxed in full-blown rocking style with “Go Your Own Way,” sparked by Campbell’s stinging guitar work.

When I saw “Free Fallin'” on set lists, I wasn’t sure who would be singing it, but I didn’t expect it to be Stevie. The song is actually perfect for her voice. She had her own wonderful history with Tom Petty, and with pictures of the late rock icon filling the screen, she thrilled us with one of her finest vocals of the night.

After bouncing through “Don't Stop,” they brought the evening to a quiet close with Nicks and McVie sharing a duet on “All Over Again.”

In the end, it was a fine, joyful show and an interesting tangent in FM’s history, but if and when they come back, and let’s hope they do, it would be nice to see Buckingham back in his spot.

There’s much to discuss about the new-look Fleetwood Mac’s concert Thursday at a full-house PPG Paints Arena.

At times, it seemed like every other concert Fleetwood Mac has played the past few decades at Pittsburgh’s current and previous hockey/concert arenas.

The classic-rockers started with the traditional “The Chain,” building the intensity to reach that deep, uncluttered and cool John McVie bass solo.

His ex-wife, Christine McVie, positioned stage right at her keyboards, let loose with her warm voice, singing songs like “Say You Love Me” and “You Make Loving Fun.” Her vocals weren’t quite as soaring and flawless as at the band’s 2014 Pittsburgh show, but still pretty special.

Stevie Nicks, as always, earned the loudest cheers with that potent rasp of hers still going strong, and that bohemian, bewitching persona equally intact to deliver crowd-pleasers “Rhiannon,” “Gypsy,” which featured a patented Stevie twirl, and “Gold Dust Woman,” where she wore a glittery gold shawl.

Also true to form, Mick Fleetwood played a drum solo that took too long to get revved up, amid shouting things like “are you out there?” to crank up the crowd noise. It was a such a lengthy solo, a roadie came out and held a plastic cup of refreshment to Fleetwood’ lips as he continued to bash away. Hey, when you’re the top-billed namesake and founder of a band, you get to solo as long as you want.

Though it was impossible to forget Lindsey Buckingham wasn’t there, booted from the band he’d brought exceptional and underrated guitar to for decades.

He’s been replaced by two stalwarts; Mike Campbell from Tom Petty’s Heartbreakers, and Neil Finn from Crowded House, whom Fleetwood made a public point Thursday of welcoming into the band.

Finn capably handled Buckingham’s vocal leads on “Go Your Own Way,” “World is Turning” and “Second Hand News,” the latter of which had a faster than normal but fun pace led by Fleetwood.

Finn offered the night’s most poignant sequence, starting with him dedicating a song to “the grieving families” of the Squirrel Hill tragedy, and to Pittsburghers in general still immersed in sorrow because of it. Finn then began singing his lovely ’80s Crowded House hit “Don’t Dream It’s Over,” backed only by light guitar and soft hand percussion as most of the band left the stage. For the final verse and chorus, Nicks came back out and sang along. Many spectators lifted and illuminated their phones like candles. It’s a song you’ve heard countless times, to the point you may have forgotten some of lyrics that stood out vividly Thursday; lines about negative forces trying to build walls between us. Finn emotionally emphasized the modified final line sung three times: “You know they won’t win ... you know they won’t win ... you know they won’t win.”

That sentiment perfectly mirrored the “Stronger Than Hate” banner with the Pittsburgh Penguins logo against a Star of David backdrop displayed on the jumbo screen behind Fleetwood Mac after its first song and before the encore.

Once “Don’t Dream It’s Over” ended, Nicks took the mic and talked about the healing properties of music and how the band felt an extra importance to be in Pittsburgh at this time. Nicks’ voice get choked up, as she urged fans to be “spiritual warriors.” The band followed with “Landslide,” emotionally sung by Nicks.

Fleetwood Mac chugged into the encore with “Go Your Own Way,” on which I found myself missing Buckingham’s vocals and guitar.

The encore began with a cover of Tom Petty’s “Free Fallin’,” which gave Campbell a chance to work his magic, having played on the original. The video screen flashed back to the late-Petty, including a number of photos of him with friend and collaborator Nicks.

Christine McVie set up the night’s final selection, “All Over Again,” saying it’s an ideal song under the circumstances, because it deals with hope and looking toward the future.

Overall a good show, though I’d have liked to have heard more of Campbell, who along with Finn spearheaded the night’s most exciting song, the guitar-blazing, way-back Fleetwood Mac track “Oh Well.” (You remember the opening stanza: “Can’t help it ’bout the shape I’m in/I can’t sing, I ain’t pretty and my legs are thin/But don’t ask me what I think of you/I might not give the answer that you want me to.”)

Without Buckingham in the band, the setlist suffered from the lack of his signature song “Tusk”. Nor did we get “Silver Springs,” Nicks’ tour-de-force as a vocalist always made more special in concert because the gut-wrenching lyrics about moving on from a busted relationship were directly inspired by her ex-lover, Buckingham, standing 10 feet from her.

This tour, with its new lineup, has stoked Fleetwood Mac members’ interest in the band’s back catalog, hence the playing of “Black Magic Woman,” a 1968 Fleetwood Mac single written by former guitarist Peter Green. Accustomed to the version they’ve heard on radio, many people mistakenly assume Santana originally wrote and recorded that song. Nicks once thought so, too.

“This was before I was in Fleetwood Mac,” she explained.

The version Fleetwood Mac played Thursday in Pittsburgh emphasized drums and didn’t try to duplicate Carlos Santana’s pyrotechnic guitar sorcery. For a cool twist, Nicks sang the song in the first person with girl power attitude, as in “I’m a black magic woman.”

The band dug even deeper to play “Tell Me All The Things You Do,” a 1970 Fleetwood Mac single written by another former guitarist, Danny Kirwan. The song had a fleet boogie beat that was rather enjoyable, but Pittsburgh fans craved the familiar, and took those several minutes to make a bathroom or beer run.


LOT'S OF VIDEOS AT THE LINK BELOW