Review: Fleetwood Mac, remade and re-energized, salutes Tom Petty at Tampa's Amalie Arena
It was a homecoming of sorts for Heartbreakers guitarist Mike Campbell, who along with Neil Finn replaced Lindsey Buckingham in the band. 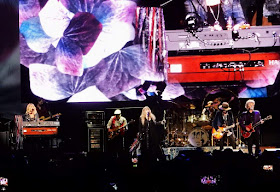 Most reviews of a legendary rock band that’s been around half a century don’t lead with the replacement guitarist who joined last year.

But this is Florida, and the heck if we’re not kicking it off with Mike Campbell.

"I gotta say, for myself personally, it’s so good to be back in the state of Florida where I grew up," the Fleetwood Mac guitarist -- man, that still sounds so weird -- told 17,000 fans midway through Monday's sold-out concert at Amalie Arena in Tampa. "Orlando, Jacksonville and of course Gainesville, where I started my band many years ago with my friend Tom."

And with the ovation that followed, the Heartbreaker hero removed his hat, bowed, and, in his first Florida show since Tom Petty’s death, ripped through a version of the vintage Mac cut (and Heartbreaker favorite) Oh Well that would’ve made his late bandmate proud.

One could say Buckingham’s departure wasn’t personal, it was business -- but with Fleetwood Mac isn’t it always a little bit of both? Buckingham claims he was fired by phone after Nicks told their manager she’d never set foot on stage with him again – an allegation that echoes a bit harsher in recent days, after it was revealed Buckingham’s vocal cords were damaged by an emergency heart surgery.

Buckingham’s lickety-split solos and snarling vocals were missed on Monday -- alas, no Tusk or Big Love -- but at this point, thanks to being one of the few things Boomers and Millennials can agree upon, the well-oiled Mac may well be unkillable.

Credit Nicks, a newly elected solo Rock and Roll Hall of Famer, who embraced her regal frontwoman (no longer co-frontperson; how ‘bout them apples, Lindsey! ) status on sterling versions of Gypsy, Landslide and Rhiannon. Her sorcerous cry and beguiling chimes glittered like you-know-what on an epic, endless Gold Dust Woman.

Less successful, sadly, was Christine McVie, an all-time songwriter back fully in the fold after a couple of tours with Fleetwood Mac and one as a duo with Buckingham. She struggled to lead the group through Everywhere and You Make Loving Fun, shining more as a pianist than a singer. Still nice to have her back on the road, though.

Buckingham’s absence marked an opportunity to explore terrain not yet overworked -- like 1970’s blues-funk get-down Tell Me All the Things You Do, a song originally led by Danny Kirwan, who died last summer. And Black Magic Woman, a song made famous by Santana, but written by original Mac frontman Peter Green -- a fact that that even after she joined the band came as news to Nicks. This version, performed “through the eyes of a woman,” she said, threw it back to the band’s bar-blues days, with Campbell sneaking all the way across the stage to trade solos with McVie on organ.

Campbell’s shaggy wizardry: Ah, well, yeah, that was a little bittersweet for his fellow Sunshine Staters; he’s been knocked down a few notches in this new band, from second-in-command to something like fourth. But you wouldn’t necessarily know it from the fire he poured into each solo. So what if it sounded just a tad neutered on manicured pop gems like Little Lies and Everywhere? The irrepressible angst he kicked into The Chain, Go Your Own Way and You Make Loving Fun was classic Campbell.

As for Finn, a consummate pro with an incomparable swoosh of salt and sand atop his noggin, his Kiwi lilt filled in fine for ol’ Linz, putting just the right amount of bite in his bark on the battle-cry sneers Second Hand News, Monday Morning and Go Your Own Way. And hey, as long as they had him there, no one complained about hearing Finn and Nicks offer a heartfelt acoustic version on the Crowded House "song of unity" Don’t Dream It’s Over.

“A song like that only comes along once in a lifetime,” Nicks said.

Fleetwood Mac has a few of those themselves, including the rousing Don’t Stop and subdued chestnut All Over Again near the end. Yet to kick off the encore, they chose another Florida favorite, Petty’s Free Fallin’, to get fans back on their feet.

Even without Petty, even without Buckingham: Chills, utter chills, with Nicks singing lead and photos of her late friend scrolling behind them. They play Free Fallin' every night, but nowhere but two hours south of Gainesville would it resonate quite this hard.

Campbell, in the end, was the second-to-last member to leave the stage, behind only the band’s mincing mascot Fleetwood. Which, on this night, was the right way to play it. A lot of those final cheers weren’t just for Fleetwood Mac, but for him.

Not too shabby for the new guy.