Stevie Nicks Stand Back Collections Available This Spring From Rhino 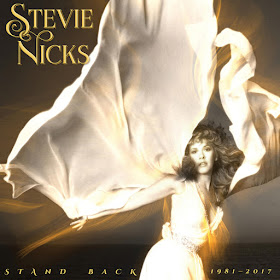 LOS ANGELES - Stevie Nicks makes history in March when the beloved singer-songwriter becomes the first female artist inducted into the Rock and Roll Hall of Fame twice - first as a member of Fleetwood Mac in 1998, and this year for an extraordinary solo career that spans nearly 40 years.

To honor Nicks' groundbreaking achievement, Rhino has assembled a variety of new releases that celebrate her solo career with essential recordings chosen from studio albums, live performances, and soundtrack contributions, plus several of her most-celebrated collaborations with artists including Tom Petty & The Heartbreakers, Don Henley, Lana Del Rey, and Lady Antebellum.

In 1981, six years after joining Fleetwood Mac, Nicks went solo for the first time with her debut Bella Donna. A massive success, it sold more than five million copies in the U.S., topped the album charts and produced four hit singles, including her signature anthem, "Edge Of Seventeen." More platinum albums followed - The Wild Heart (1983), Rock A Little (1985), and The Other Side Of The Mirror (1989). Music from all eight of Nicks' studio albums are included in the set, from Top 10 hits like "Stand Back" and "Talk To Me" to "The Dealer" from her latest, 2014's 24 Karat Gold: Songs From The Vault.

On STAND BACK, those solo tracks are joined by Nicks' memorable collaborations with other artists, including "Stop Draggin' My Heart Around" with Tom Petty & The Heartbreakers, "Leather And Lace" with Don Henley, "You're Not The One" with Sheryl Crow, and "Beautiful People Beautiful Problems" with Lana Del Rey.

Beyond Nicks' work as a recording artist, STAND BACK also explores her career on stage with outstanding live recordings, including performances from her 1981 Bella Donna tour ("Dreams" and "Rhiannon"), and her 2009 live album The Soundstage Sessions ("Sara" and a cover of Dave Matthews Band's "Crash Into Me.") Rounding out the collection are several of her contributions to film soundtracks, like "Blue Lamp" from Heavy Metal and "If You Ever Did Believe" from Practical Magic.

“Stop Draggin’ My Heart Around” – with Tom Petty & The Heartbreakers
“Leather And Lace”– with Don Henley
“Nightbird”
“I Will Run To You” – with Tom Petty & The Heartbreakers
“Two Kinds Of Love”
“Whenever I Call You ‘Friend’” – with Kenny Loggins
“Magnet & Steel” – with Walter Egan
“Gold” – with John Stewart
“Too Far From Texas” – with Natalie Maines
“Sorcerer”
“You’re Not The One” – with Sheryl Crow
“Santa Claus Is Coming To Town” – with Chris Isaak
“Cheaper Than Free” – featuring Dave Stewart
“You Can’t Fix This” – with Dave Grohl, Taylor Hawkins, and Rami Jaffee
“Golden” – with Lady Antebellum
“Blue Water” – featuring Lady Antebellum
“Borrowed” – with LeAnn Rimes
“Beautiful People Beautiful Problems” – with Lana Del Rey