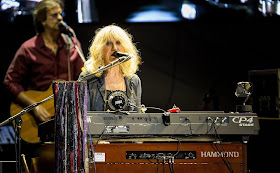 Last year’s trademark Fleetwood Mac drama that led up to the group’s current tour had already been plenty: the dismissal a year ago of guitarist Lindsey Buckingham, who then took legal action that was settled out of court. But the day before the tour pulled into Austin for Saturday’s Erwin Center show, word circulated that Buckingham had undergone emergency open heart surgery a week ago.

Buckingham’s reportedly recovering, though there’s concern about possibly permanent vocal cord damage. At 69, he’s the youngest of the five musicians who recorded the mid-1970s classic “Rumours” and “Fleetwood Mac,” which together sold more than 25 million copies and eventually put the band in the Rock and Roll Hall of Fame.

Recasting Fleetwood Mac without him was a challenge, though he’d been absent from the group for an extended stretch before, and Fleetwood Mac’s 52-year history is interwoven with significant lineup changes. Drummer Mick Fleetwood, bassist John McVie, keyboardist Christine McVie and singer Stevie Nicks welcomed Crowded House leader Neil Finn and Tom Petty & the Heartbreakers guitarist Mike Campbell into the fold for this tour, which began last fall and continues through September of this year.

How’d it work? Well, mixed results. There are moments when they clearly miss Buckingham. Finn’s a fine singer and did his best on indelible Buckingham imprints such as “Second Hand News” and “Monday Morning,” though it was hard not to think of them as a Buckingham cover band in those moments. Finn couldn’t hit Lindsey’s high notes on “World Turning” (a Buckingham/Christine McVie co-write), though he seemed fully up to speed on “The Chain” and “Go Your Own Way,” definitive Fleetwood Mac numbers that bookended the main set.


Campbell, doing the heavy lifting on guitar at stage left, was solid as a rock in his role, exactly what you’d expect for a musician who’s earned universal respect from his peers and from fans. He got a well-deserved spotlight mid-set when he took the lead vocal on co-founder Peter Green’s “Oh Well,” one of several pre-Buckingham/Nicks-era nuggets from the Fleetwood Mac catalog that were wisely included in the show.

Finn got his own special moment right after, singing his Crowded House classic “Don’t Dream It’s Over” to the delight of a completely packed Erwin Center crowd. Many sang along and waved their lit-up cell phones in the air, a nice vote of confidence for the young guy. (At 60, Finn’s a decade behind youngest Mac mainstay Nicks.)

Christine, 75, is the oldest of the bunch, but she remains vital in making this band work, especially with Buckingham absent. She wrote or co-wrote nine of the show’s 22 songs, three more than the higher-profile Nicks. “Say You Love Me,” “You Make Loving Fun” and “Don’t Stop” were expected Christine high points, but a surprise addition was “All Over Again,” a mostly forgotten but lovely song from 1995′s “Time” that Christine and Stevie sang as a duet to end the night.

Nicks got huge ovations for crowd favorites such as “Dreams,” “Rhiannon” and “Gold Dust Woman.” Smartly making a local reference, she dedicated “Landslide” to Austinite Christopher Cross, who was in attendance, calling him “one of my favorite singers of all time.” She also did a fine job with another Green gem, “Black Magic Woman” (sung by Austinite Gregg Rolie on Santana’s 1970 hit version). And it was lovely to hear her take the lead vocal on an encore-opening rendition of “Free Fallin’” by her good friend Tom Petty, after Campbell had chimed in with the song’s signature guitar intro.

Fleetwood remains the band’s spiritual center, hamming up an extended drum solo in “World Turning” before graciously introducing the full band (which included five additional musicians on keyboards, guitar, percussion and backing vocals). And it came to him to acknowledge, at the very end of the night, the absence that was felt throughout. Finn gave a brief shoutout to Buckingham in kicking off the main-set closer “Go Your Own Way,” but Fleetwood offered a heartfelt tribute and “get well soon” as he said his goodbyes. 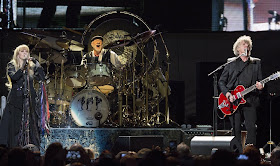 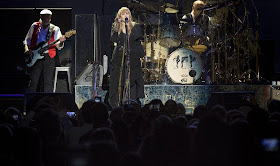