Stevie Nicks was threatening to steal the evening, as can tend to happen when Stevie Nicks is in your band.

Not that there’s anything wrong with what the rest of Fleetwood Mac was doing on Sunday night at Spectrum Center in Charlotte.

It’s just that, well, Christie McVie — as remarkably velvety as her voice still sounds, relatively speaking, at 75 — isn’t much of a showwoman; and Mick Fleetwood — while he still seems to be having oodles of fun beating on the drums and shouting “WoooOOOOOOOooooo!,” at 71 — is perhaps too much of a showman, so that his manic persona almost feels like a schtick; and John McVie — I mean, he still can tickle the bass authoritatively, at 73 — but he now blends into the scenery as much as the band’s lesser-known seventh, eighth, and ninth men.

As for Lindsey Buckingham replacements Neil Finn and Mike Campbell, I’ll get to them in a minute.

But for now, like I was saying, it’s kind of hard to take your eyes off of Stevie Nicks. Or your ears.

Something about the way she drifts around the stage, twirling 360 degrees on her toes, shaking her tambourine to what seems like the beat of her own drum, waving her hands like a madwoman — it’s almost like everyone else is performing a show for middle-aged couples in button-down shirts and dressy blouses while Nicks is at Burning Man riding a pot-brownie high.

And the close-to-sold-out crowd seemed to go particularly wild Sunday night whenever the Mac came back with a song that put Nicks on lead vocals: “Dreams,” “Rhiannon,” “Gypsy,” “Gold Dust Woman,” as well as a reworked version of Peter Green’s 1968 deep cut “Black Magic Woman” (made famous by Santana in 1970) and an emotional cover of Tom Petty’s “Free Fallin’.” That smoky voice, made smokier by thousands of menthol cigarettes and 70 years of often-hard living, seems to be aging incredibly well all things considered.

Every time she stepped to the mic to sing or say something, or stepped to the side to whirl like a dervish, fans’ hearts fluttered. She could have tripped and fallen on her face and people probably would have looked the other way and pretended it never happened. It seemed like she could do no wrong.

Or so we thought.

A little more than halfway through the 2-hour-and-19-minute, 22-song set — after Nicks joined Finn for a gorgeous rendition of “Don’t Dream It’s Over,” which he wrote for his band Crowded House back in the mid-’80s — she went off script for a minute.

It’s a minute she surely wishes she could have back.

(Oh, and I say she went off script because some friends, who were sitting in the upper level so far to the right of the stage that they were practically looking down at Fleetwood Mac’s backs, said they could see words scrolling on what appeared to be a teleprompter.)

It started out fine. Nicks called Finn’s hit “a song like that only comes along once in a lifetime.” Then she took a wrong turn:

“It is, you know, Oscar night, right? You’re all here, but it’s still Oscar night. So since I really don’t know anybody in Sou — South Carolina,” and here Nicks paused for a millisecond. It felt, at least to me, like that millisecond lasted half an hour — and if it actually had, I would have done everything in my power to get a note to her, warning her of her impending mistake. I think she sensed something was off. But it was too late.

You could almost feel everyone in the arena holding their breaths, getting ready to slap their hands against their foreheads (including Finn), as she spit it out:

“So since I really don’t know anybody in Sou — South Carolina, I would just like to say, ‘The OSCAR GOES TO SOUTH CAROLINA!’” She could probably tell immediately that she’d screwed up, since fans weren’t cheering like she’d surely hoped. We all just muttered some form of “OMG” to our dates, in unison. She quickly blurted out “CHARLOTTE!” But now it was way too late.

Finn didn’t know how to save her. And she arguably made things worse by stumbling through an explanation that made practically no sense whatsoever. “North Carolina is in my brain, thank you, because — I think because of the Sturgis Motorcycle Benefit place — big festival, right? That’s like in North Dakota, right? It has nothing to do with this except for the north —”

“We’re covering everybody,” Finn broke in, forcing some laughter. “It’s great. We’ve just got everyone —”

“We are. We’re at the festival, we’re at the Oscars, we’re everywhere tonight!” Nicks said. “So anyway. OK. I’m sorry, I’m sorry. Sometimes, you know, five years of speech communication, it’s like — in college, I just have to...” and she trailed off, saying something I couldn’t make out.

What did save her is that the next song on the setlist was “Landslide,” and despite the embarrassment she’d just suffered, Nicks sang it exquisitely. She didn’t seem to have been knocked off her game at all.

Yep, she turned it around like a pro and never looked back.

But ... I’m sorry, I just think it’s worth making a big deal out of because that kind of gaffe is the type a pro should never make — especially someone who’s been in the business for more than half a century, and who next month will be inducted into the Rock and Roll Hall of Fame as a solo artist (she’s already in with Fleetwood Mac).

It’s certainly harder for me to swallow that than it is to swallow Finn and Mike Campbell taking the place of ousted longtime member Buckingham. And while I wanted to go into more detail about what I think of a Buckingham-less Fleetwood Mac, I’ll just say this in the interest of not taking up too much more of your time: I missed him, yet at the same time, I enjoyed Finn’s robust voice and Campbell’s meaty guitar chops.

Would I have rather seen a lineup with Fleetwood, the McVies, Nicks and Buckingham? Sure. But as personnel changes go, it’s not something I expect would take as much getting used to as, say, Arnel Pineda stepping in for Steve Perry.

And perhaps the show’s many highlights were enough to distract fans who may have missed Buckingham more than I did.

Just a few of my personal favorites: Christine McVie coming out from behind her Hammond/CP4 setup to shake the maracas while cooing the dreamily bouncy “Everywhere”; Mick Fleetwood dripping sweat, grinning and speaking in tongues while banging out a drum solo in the middle of “World Turning,” alongside virtuoso percussionist Taku Hirano; Nicks covering “Free Fallin’” as a slideshow cycled through photos of the late Tom Petty by himself, Petty with Campbell (his longtime lead guitarist) and Petty with Nicks from the “Stop Draggin’ My Heart Around Days.”

“Free Fallin’” was the first of three songs in the encore, followed by a jubilant “Don’t Stop” that had the whole joint rocking and, finally, a rare duet by Nicks and Christine McVie to close the night.

It was a risky choice — “All Over Again,” off of 1995’s “Time,” their least-popular album — and frankly, I would have flopped it and ended the show on “Don’t Stop.” Maybe that song is a bit of a cliche, but it’s clearly a cliche fans love; they were as energized by the anthem as they were by anything all night.

Anyway, that’s what I would have wanted people’s last memory of the concert to be as they headed back home to North Carolina.

Or South Carolina. Or South Dakota. 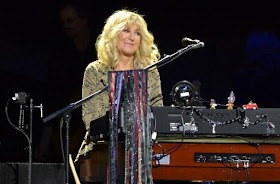 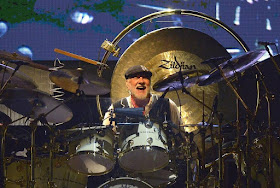 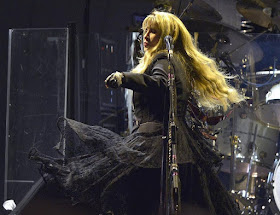 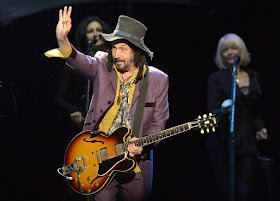 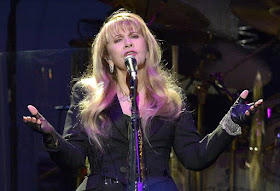