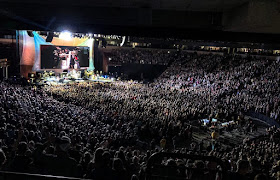 The bass drum started that familiar thump, keying one of classic rock’s most recognizable slow builds, forming into the bittersweet anthem “The Chain.” But on this night, it wasn’t guitarist Lindsey Buckingham yowling out the opening number’s searing rejoinder — “And if you don't love me now / You will never love me again / I can still hear you saying / You would never break the chain.”

Regardless of whether they feel they were justified in firing Buckingham, Mac’s remaining core of Mick Fleetwood, John McVie, Stevie Nicks and Christine McVie broke the chain. And while their new hires brought impressive skills to the table, their insistence — displayed during “The Chain” — that they could sub Finn and Campbell in without losing anything marred some of the band’s best songs. It also made them seem like entitled jerks.

Though they’re both great guitarists, neither Finn nor Campbell could replicate the crisp, percussive fingerpicking that surges through the jauntier highlights from group’s famed '70s triptych of Fleetwood Mac, Rumours and Tusk. And Finn’s voice was somehow both too close and too far away from Buckingham’s — similar enough in tone, but lacking the nervy exuberance that made his predecessor's performances pop. To my ear, it was like taking a sip of milk that’s not quite fresh but not quite sour, still drinkable but with a nagging aftertaste.

As such, some songs were doomed to fail, and probably should have been avoided all together. The punchy hallmark “Second Hand News” fell frustratingly flat, with a vocal approach that felt blunted and mirthless compared to Buckingham, and with Campbell taking bluesy swings around the rhythm rather than playing quickly within it, zapping the song’s irrepressible momentum. Similar vocal issues plagued pre-encore closer “Go Your Own Way,” and while the sweeping kiss-off was still big and energetic, Finn and Nicks’ chummy glances fell limp compared to the fiery tension that came when she sang the song with her old flame.

To be fair to all involved, many of the songs really worked. The band stretched out some of its more smoldering epics, exploring heady extended grooves that Buckingham’s proclivity for zippy concision would have likely precluded, and exploiting the looser-limbed tendencies of the new members. The Nicks-led stunners “Rhiannon” and “Gold Dust Woman” benefited greatly from such treatments, and the singer filled each with the biting but beautiful presence that is her trademark. She might not be able to hit all the high notes anymore, but as she showed during an equally impressive — and occasionally spine-tingling — performance of the stripped-down ballad “Landslide,” hers remains one of rock ‘n’ roll’s most powerfully emotive voices.

Also exciting were performances of tunes from the blues band era that preceded Nicks and Buckingham’s conscription and the group’s chart-scorching second life in pop-rock. Nicks leaned into her trademark rasp for an appropriately murky and mystic trip through “Black Magic Woman” — yes, it was Fleetwood Mac, not Santana, that originated that one. And “Oh Well,” a blistering showcase for founding guitarist Peter Green, offered a similar opportunity for Campbell, who proved that his lackluster moments were due to fit, not skill. (Finn got his own well-deserved redemption during a swaying spin through the beautiful Crowded House hit “Don’t Dream It’s Over.”)

Still, it was in poor taste that the band made a point to sing the praises of former contributors like Green when introducing these dives into its back catalog, while never once giving a nod to Buckingham when playing his songs. Given the fact that the former guitarist underwent emergency open heart surgery earlier this month that may have permanently damaged his vocal cords, the omission felt particularly glaring.

Fleetwood Mac is a different band following Buckingham’s exit. And until it takes full ownership of that fact, it’ll never be more than a serviceable imitation of its former self. 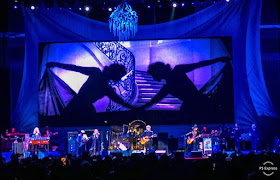 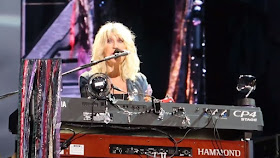 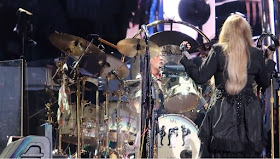