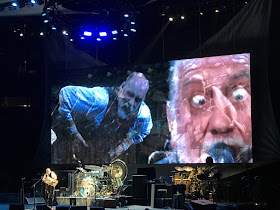 The bickering started in the ticket line.

A fifty-something security guard attempted to persuade a crowd blocking the sidewalk to form an orderly line outside the Pepsi Center Thursday night ahead of the Fleetwood Mac concert.

A seventy-something man belted out, “I’m not moving again!”

“Don’t get fussy with me,” the security guard clapped back. Just as the older man started to lunge, his wife grabbed his arm.

Then two teens and their mom cut in line, ignoring the glares of everyone around them by staring at their phones like zombies.

Millennials, Gen-Xers and baby boomers had all bought tickets to see a band that has given the world brilliantly crafted, durable soft-rock soundtracks for breakups, hopes and sorrows. But last night made clear that fans of the band are just as unpredictable as Fleetwood Mac itself.

Still, despite five decades of operatic drama, with members sleeping with each other, marrying, divorcing, flaming out, returning and whatnot (a confusing saga that rivals the Trump White House in its indecipherable tangle of who’s in, who’s out and who’s suing or screwing whom) — the group managed to deliver a solid performance Thursday night.

The musicians took turns acting like the center of the show, which served them all well, and broke out hits like “Little Lies” and a tear-jerky rendition of “Landslide.” They played “Black Magic Woman” and a cover of “Free Fallin’.” The show crescendoed with “Don’t Stop" and wrapped with “All Over Again,” a melancholy duet between Christine McVie and Stevie Nicks.

Meanwhile, all those generations mashed together in the crowd couldn’t figure out how to get along.

The first problem: Nobody knew whether to sit or stand. When I arrived, I chose to sit, grateful for an only moderately obstructed view. But then the dancing seniors around me made me feel bad. “Whippersnapper, why are you sitting?" their raised eyebrows said.

Then there was the band, with members in their seventies, committed to standing and playing for two hours. They had instruments strapped to their bodies; all I was holding was a notebook and a pen. The least I could do, as a person who has no trouble standing, was get up and join the energetic crowd in a little dancing.

A few moments later, a claw gripped my shoulder. A voice grumbled, but with earplugs in and the band playing, I couldn’t hear what was being said. The grip tightened. I turned around, and a red-faced baby boomer barked, “Can you sit down?”

No "please" or "thank you." Just the command.

I’m tall. I try to avoid standing in a crowd at an open-floor venue like the Ogden or Fillmore. But the Pepsi Center seats are tiered. I was doing nothing unusual.

Still, I inferred that he and his squad of boomers, whose binoculars made them look more like bird-watchers than rock fans, needed to sit to be comfortable, and from that position, perhaps they could only see my love handles.

So despite the man’s rude tone, I obliged. Get along, right?

Then they started griping at the Gen-Xers standing next to them — perhaps because they were blocking the big screen. Those people weren’t as accommodating.

That didn’t go over well. The red-faced boomer and his wife looked at each other with razor blades in their eyes and started cursing.

“Sit down,” the woman roared.

For a moment, I thought the two generations would brawl. There would be an awkward punch-and-grab-athon and somebody would break a sun-spotted arm or punch right through a brittle sternum. Instead, the boomers sat there, straining to turn their lips into something like a smile, and the Gen-Xers loudly mocked them.

“Why did you bring him along?” one woman said to me about the red-faced man who had grabbed me. “You should have left him at home.”

What made the situation more awkward was that a few other dancing boomers around me kept giving me the stink-eye. “Kids these days," I'm sure they were thinking, even though I'm forty. "They just don’t know how to rock.”

I've always loved the notion that concerts can be testing grounds for utopia. People come together despite their differences for a shared experience of joy.

But how can all these generations share space without irritating each other? Is it reasonable to assume you can dance at a rock show anymore? Or should younger crowds sit to appease the flower-power children of the ’60s — a generation that once spat in the face of authority?

Those are questions too large for me to answer. All I know is that despite a few squabbles, Fleetwood Mac moved the crowd.

Toward the end of the night, joyful drummer and the band's namesake, Mick Fleetwood, offered some smiley reminders about how we should all be kind to one another in these times.

Is Fleetwood delusional? Is his hope that people can be kind to one another reasonable in a world where something as seemingly inconsequential as concert seating arrangements causes explosive fights?

It’s nice for Fleetwood to want something different, kinder (something his own band hardly achieves). But people don’t get along these days. Even, I guess, at a concert.
Nickslive at Tuesday, February 12, 2019
Share