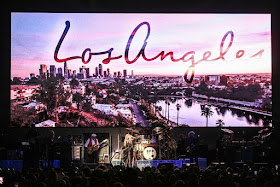 The year may be winding down but in Los Angeles, the live music offerings have been more abundant than ever, a true gift for concertgoers that reflects the seasonal merriment and giving vibes of December. Except, of course, nobody is giving away anything for free, which means that for fans on a budget, decisions have to be made (many of you probably already maxed out your plastic for those Stones at the Rose Bowl tickets, not to mention Christmas presents). Obviously the live music industry is thriving, though. How else could Nine Inch Nails sell out six nights at the Palladium (look for my review of Saturday’s show next week) and Fleetwood Mac fill three nights at the Forum, sans Lindsey Buckingham?

I had never seen Fleetwood Mac live, so the prospect of finally doing so at the urging of my 12-year-old daughter (“Children get older/I’m getting older too”) was exciting, but I was admittedly skeptical that I’d enjoy it as much without the dominant male voice of the group. For my daughter, it was “all about Stevie,” and I’m sure a lot of people — especially females — feel that way. Nicks’ bewitching persona and gorgeous gravelly vocals have always made her the focal point and the one we want to join in with for an enchanted sing-along. But true fans know that Buckingham is as important to the band’s sound as Stevie Nicks, the McVies and its namesake percussionist. Or is he?

On the first of three nights in Inglewood, I must admit I did miss seeing and hearing Buckingham. Apparently his last performance playing Fleetwood Mac songs at Dodger Stadium was pitifully phoned in, but I had to wonder if it would’ve mattered. Seeing the original lineup of any iconic band has value, even and maybe especially when there is tension between members. (I realized this more than ever after catching Chris Robinson's Brotherhood at the Henry Fonda Theatre last Saturday, and missing the way Chris and his brother Rich would go head to head, guitar riff to vocal run, with The Black Crowes). Fleetwood Mac has always had tension, and the music fed off of it. There was no such tension on Tuesday; just a cheery, feel-good procession of hits, with Buckingham’s parts filled in by Crowded House’s Neil Finn and Tom Petty & The Heartbreakers’ Mike Campbell.

The pair did a fine job, faithfully covering Buckingham tracks like “Never Going Back Again” and “Go Your Own Way," and harmonizing in a more helpful than hearty way on “The Chain,” but the absence was still noticeable. It would have been a classy move if the band had noted the elephant (or rather penguin, as seen on the cover of their latest compilation) in the room, but instead they simply praised their new touring members who, granted, deserved it. A guitar-driven jam near midset between Fleetwood and Campbell was pretty far out, and the moment when Finn got to sing Crowded House’s biggest hit, “Don't Dream It's Over” with Nicks on backup, was magical.

Nicks can't hit all the high notes she used to, but backup singers took up the slack where appropriate. There was nothing to fault in anyone's performance; all around, it was a satisfying show, backdropped with majestic visuals that complemented the music and glimmered with hints of nostalgic imagery from the band's history. McVie and Nicks, both dressed in black, looked healthy and seemed really happy to be there. Mick Fleetwood was positively giddy, serving up a raucous solo middle-end of the show, and all their renditions sounded reverent to the past while sparking a light, fresh feel with bits of rearrangement that never felt forced. It wouldn't surprise anyone if Fleetwood Mac's original lineup reunited again in the future, but right now it would seem Buckingham's departure has freed everyone up to make (music) loving fun again. 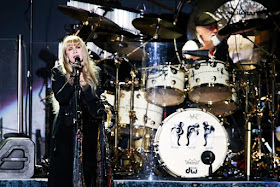