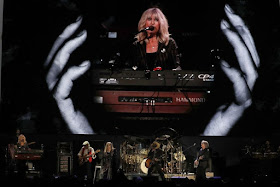 The idea of turnover is baked into Fleetwood Mac, the long-running British American band that arrived in its latest (and possibly strangest) iteration at the Forum on Tuesday for the first show in a three-night stand.

Formed as a crusty blues-revival outfit in London in the late 1960s, the group burned through a series of singers and guitarists before resettling years later in Los Angeles, where Lindsey Buckingham and Stevie Nicks helped transform Fleetwood Mac into a polished hit-making machine.

So in a sense it comes as no surprise — as secondhand news, if you will — that the band is on the road this year after it fired Buckingham (allegedly because he didn’t want to tour) and replaced him with a pair of skilled but distantly connected pros: Neil Finn of Crowded House and Mike Campbell of Tom Petty’s Heartbreakers.

For this famously mercenary group, no one — not even the architect of 1977’s gazillion-selling “Rumours” — is safe from elimination.

Yet Buckingham in recent years had taken to describing Fleetwood Mac as a kind of monument to durability. Having quit the band himself in the ’80s (only to return a decade later), he seemed to be putting across the idea that the members’ ability to “rise above the dysfunction,” as he put it to me in a 2017 interview, gave their music a “heroic” quality that distinguished the group from other classic-rock acts still doing business.

The question, then, is what remains of Fleetwood Mac minus that supposed selling point. Is this version of the band on tour to showcase, or even to rethink, the songs that continue to resonate with old fans — and keep finding new ones, including young admirers such as Harry Styles and Haim?

Or is it merely scooping up money too tempting to leave on the table? (True pop fans know this is a false dichotomy, though nobody wants to leave a concert having concluded the latter.)

Fleetwood Mac isn’t alone in raising these questions. This year the Eagles and Steely Dan both toured without founding members — the late Glenn Frey and the late Walter Becker, respectively — widely thought to be indispensable while they were alive.

But moving beyond death is a different enterprise than what’s happening here. In this case the splintering was voluntary; it was pretty brutal too, involving a lawsuit that Buckingham says has been settled but which punctured the fantasy of creative fellowship so prevalent in baby-boomer culture.

Indeed, the folks onstage Tuesday — Nicks, Christine McVie, Mick Fleetwood and John McVie along with Finn and Campbell — said not a word about their erstwhile comrade, as though Buckingham’s crucial role in Fleetwood Mac had been erased. (They’ll be back at the Forum on Thursday and Saturday.)

Cold-blooded? For sure. Yet maybe that was the only way to do this, given that what made the show work was a jumpy, back-to-the-beginning vibe in stark contrast with the fatigue that descended during the band’s final go-’round with Buckingham (as seen in a pathetic performance at last year’s Classic West festival at Dodger Stadium).

Yes, Finn and Campbell were playing Buckingham’s parts in “The Chain” and “Second Hand News” and “Go Your Own Way.” But you could sense they were trying to put their own stamp on the music; the small adjustments — in “Little Lies,” for example, Campbell did the song’s signature synth lick on electric guitar — allowed you to imagine an alternate history in which these guys had been there decades ago when Mick Fleetwood decided to shake up the band again.

Even when they stuck to the original arrangements, the musicians played with an energy that served to brush the dust off “Everywhere” and “Say You Love Me”; the tunes didn’t feel new, exactly, but freshly discovered, which is about as much as you could hope for.

I’d happily have done without “Black Magic Woman” and “Oh Well” — vestiges from Fleetwood Mac’s unremarkable early days that sounded no less generic at the Forum.

But Finn’s rendition of Crowded House’s “Don’t Dream It’s Over” deepened the illusion of his belonging here; with lovely backing vocals from Nicks, it sounded like something they might’ve written together in 1974.

In an encore, Campbell and Nicks brought in another selection from outside Fleetwood Mac’s songbook: Petty’s indelible “Free Fallin’,” which the group performed as photos of the beloved rocker, who died last year, flashed across a giant video screen at the rear of the stage.

For anyone with a stake in Southern California’s musical legacy — the tradition Fleetwood Mac moved here to join — the moment was undeniably poignant.

But that didn’t mean it wasn’t also kind of weird: a tribute to the dearly departed from a band that can treat its living like trash.
Nickslive at Tuesday, February 12, 2019
Share