REVIEW Fleetwood Mac Live in LA at The Forum December 11, 2018

5 impressions of the new version of Fleetwood Mac and its first concert at the Forum
By PETER LARSEN | LOS ANGELES DAILY NEWS
Photos: Kelly A. Swift 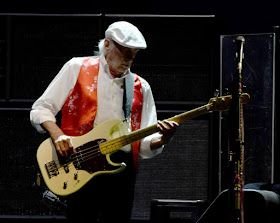 Fleetwood Mac played the first of three shows at the Forum on Tuesday and yes, despite what you’ve thought or heard, it is still Fleetwood Mac even without Lindsey Buckingham, the longtime singer-guitarist was ousted earlier this year.

The question you ask then is whether this version is good, and with the additions of Crowded House singer-guitarist Neil Finn on Buckingham’s vocals, and Mike Campbell, long a member of Tom Petty & the Heartbreakers on Buckingham’s lead guitar licks, the answer is: absolutely.

In a set that packed 22 songs and one massive old-school drum solo into two hours and 45 minutes, the fans got almost all the hits they wanted and a few rarer numbers that probably wouldn’t have shown up if Buckingham was still in the band, while both Finn and Campbell got spotlight moments for their work in their longtime bands.

Here are five impressions that stick in the memory the morning after.


1. OK, it was a little weird: Not gonna lie, when the lights came up and the ever-boyish Finn and hat-wearing Campbell were there instead of Buckingham you noticed. Finn kicked off the show with lead vocals on “The Chain,” Campbell sizzled through a solo near the finish and together the two made the song sound close to the way it always had. But you noticed.

Not that the missing elephant in the arena was ever mentioned directly. After that first number, Nicks greeted the crowd, noting that this is the new lineup’s 29th show, with two more at the Forum on Thursday and Saturday before wrapping things up. “It’s been a journey, a very interesting journey,” she added, and you can read into that what you will, but over the course of those shows Buckingham has done interviews offering his side of the story, which boils down to his claim that Stevie wanted him out.

2. So, so many hits: By my count, 10 of the 20 Fleetwood Mac songs in the set reached at least the Top 20 on the U.S. charts, add to that Top 10 hits by Crowded House and Tom Petty and you basically heard the band play tunes that were constants on the radio from roughly 1976 to 1987. Early in the show, a run of songs skipped from “Little Lies” to “Dreams,” the band’s only No. 1 single, then “Second Hand News” and “Say You Love Me.” An hour or more later, the main set wrapped up with “You Make Loving Fun,” “Gold Dust Woman,” and “You Can Go Your Own Way.”

3. What’s old was new: The absence of Buckingham eliminated all three songs from the “Tusk” album that were in the show four years ago when Fleetwood Mac played the Forum – not a surprise, it’s an album very closely associated with him. But that opened up space for songs from deeper in the Mac catalog, before Buckingham and Nicks joined and the band played more blues than pop.

“Black Magic Woman,” which Nicks seemed to say she hadn’t known had been written by Fleetwood Mac, the Santana version two years later long the definitive take, saw her take on the vocals with a feminist twist – “I’m a black magic woman,” she sang, in contrast to the “Got a black magic woman” of the original lyrics by Peter Green – while Campbell tore through a few lengthy Santana-esque guitar solos. “Tell Me All The Things You Do” and “Oh Well,” the latter featuring vocals and more hot guitar licks by Campbell, also reached back nearly 50 years to that earlier incarnation of the band.

4. Aging well: First off, let’s just consider the fact that drummer Fleetwood, at 71, still has the boyish delight and stamina to play a classic rock drum solo, which ran more than 10 minutes, maybe closer to 15, during the middle of “World Turning,” the rest of the band leaving the stage, taking a quick nap in the back, before returning to finish the song with him when he was finally done. Excessive? Sure. Entertaining? Mostly. Impressive? Absolutely.

John McVie, 73, as always remains a rock-solid silent presence on bass, Christine McVie, 75, sounded lovely right until the end when it seemed she might have gotten a little emotional during an encore-closing duet with Nicks on the relative rarity “All Over Again.” And Nicks, now 70, might shift her vocals into a lower range at times – noticed most on “Rhiannon,” one of the biggest crowd-pleasers of the night – but she still does all her Stevie Nicks Tricks, twirling and dancing, banging that be-ribboned tambourine, and during “Gold Dust Woman” striking dramatic pose after pose to the delight of the crowd.

Chemistry check: Even when these guys were feuding at their finest – when Nicks and Buckingham and the McVies were in relationships that were coming apart 40 years ago – they still came together for the music. And whatever bad blood if any that exists today isn’t seen, with the additions of Finn and Campbell seemingly a delight for all. Finn sang the Crowded House hit “Don’t Dream It’s Over,” with Nicks coming out to sing the final verses with him, and two stayed together on stage for “Landslide,” a gorgeous version with Finn beaming at Nicks as they looked at each during the song.

The encore opened with a moving moment totally outside any drama past or present, with Nicks singing the Tom Petty hit “Free Fallin’” as Campbell played a part he’s done for decades and slides of the late Petty, Campbell and Petty’s sometimes collaborator Nicks flashed on the screen above the stage. When “Don’t Stop” followed, and “All Over Again” closed out the night, you could take those titles as a reason why Fleetwood Mac carries on. 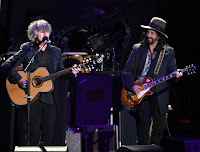 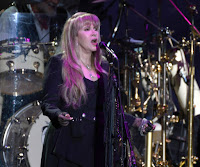 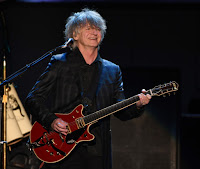 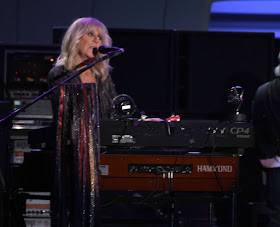