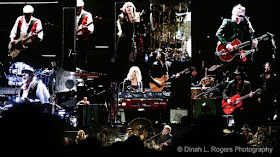 Fleetwood Mac summoned the magic of the 1970s at the Smoothie King Center on Saturday (Feb. 16) with a string of hits that are wound into the musical DNA of multiple generations.

I was late to Saturday’s concert, but it didn’t take long for Stevie Nicks to put the squeeze on my heart yet again with her fragile, girlish voice, as she sang “Landslide." Nicks' melancholy contemplation of the passage of time probably seemed more profound than ever to her audience, many of whom had silver hair that shone like snow-covered hills.

Before the song, Nicks had congratulated guitarist Neil Finn (a newcomer to the band) on the imminent arrival of a grandchild.

But, as anyone in attendance will tell you, the years have not dimmed the band’s passion or musicianship. Mick Fleetwood attacked his array of drums and cymbals as athletically as in days of old, Christine McVie’s understated vocals still poured from beneath her shaggy bangs as unwaveringly as ever and Mike Campbell (an alumnus of the late Tom Petty’s band who is replacing Lindsey Buckingham on the current tour) provided the soaring symphonic leads the band’s classics demanded.

The group closed the concert with “Go Your Own Way,” Tom Petty’s “Free Fallin’” and “Don’t Stop Thinking About Tomorrow,” a trio of anthems that seemed to capture the sweep of the band’s tumultuous half-century career (the group’s personal and professional ups and downs are legendary).

Fleetwood Mac (whose original members have all entered their eighth decades) ended their New Orleans show with a wistful duet by Nicks and McVie called “All Over Again,” that left no doubt that they wouldn't trade their long experience together. “Let's stop before it's too late,” the venerable rockers sang, “and leave it all up to the fates, ‘cause in spite of the heartaches and troubles in love, I'd do it all over, I’d do it all over again.”
Nickslive at Sunday, February 17, 2019
Share