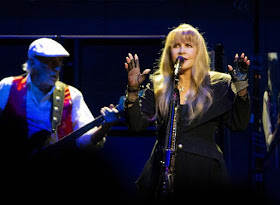 Fleetwood Mac have always found a way to tour regardless of which members could agree to tolerate each other's company on stage enough to pull it off.

There was even a tour in the '90s where the only two members connecting the lineup onstage to the albums that are destined to remain their most successful efforts – "Fleetwood Mac" and "Rumours" – were drummer Mick Fleetwood and bassist John McVie, the founding members whose names combined to give you Fleetwood Mac.

It's no surprise, then, to find them out touring without Lindsey Buckingham on what should've been titled the Buckingham Nix Tour (he'd have hated that).

Swapping out links in the chain that supposedly keeps together is what they do.

We've just been spoiled since the "Rumours" lineup reconvened in 1997 (with Christine McVie returning from a 16-year sabbatical for the On With the Show Tour in 2014).

So how was it? 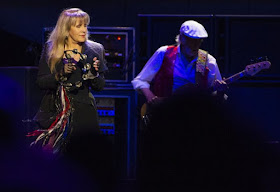 The extent to which you missed him may depend on how much you appreciated what he brings to the proceedings in the first place. But the fact that it took two musicians to replace him says a lot about how much he brings to Fleetwood Mac.

And the thought of them letting the tension that led to this year's separation play out in the songs makes it feel like a bit of a missed opportunity.

Neil Finn of Crowded House and Split Enz did a fine job of handling Buckingham's vocal parts and even sang his own "Don't Dream It's Over," an understated highlight of the set that turned into a sweet duet with Stevie Nicks, who said "a song like that comes along about every million years." 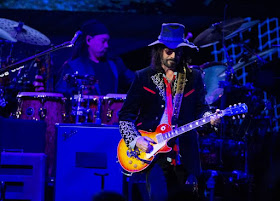 And it was great to see Mike Campbell of Tom Petty's Heartbreakers back in the spotlight a year after losing his friend and fellow traveler to an accidental overdose on pain medication.

Campbell sounded brilliant, as he tends to do, whether playing it close to the original recordings on the "Rumours" tracks or stretching out more while jamming on "Black Magic Woman" and "Oh Well," two classics from the Peter Green years.

He even took a crack at singing lead – with all the character required – on "Oh Well."

He also brought a charismatic presence all his own to the stage, in his floppy hat and shades, and played a key role in a very touching tribute to his former bandmate as Stevie Nicks sang "Free Fallin'" while the screen behind them filled with images of Petty, Nicks and Campbell through the years. 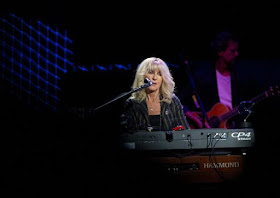 Christine McVie was a commanding presence, singing lead on several of the concert's more compelling highlights, from "Little Lies" and "Say You Love Me" to "Everywhere" and "Hold Me," a song from 1982's "Mirage" that prior to this tour had not been played by Fleetwood Mac since 1982.

As great as it was to see her back in action on the last tour, she was even better this time, touching off one of the concert's most enthusiastic singalongs with "You Make Loving Fun."

Stevie Nicks: 'This actually is my home'

As for Nicks, she definitely brought her A-game to the table, reminding the crowd "I was born here" and talking about her deep connection to the Valley before dedicating "Landslide" and eventually the whole night to her brother.

"More than Oakland or San Jose, this actually is my home," she said. "I was born here in 1948. So I lived here and I loved it and I had a house here for a long, long time and my parents, and I wrote a lot of songs here.... So I would like to dedicate this song to someone who no matter what our problems are or how much we fight or what comes between us, he always has my back, my brother, Christopher Nicks."

"Landslide" was tender and beautiful, an emotional highlight rivaled only by "Rhiannon," which built to a fiery climax.

She referenced the Year of the Woman before recasting Green's "Black Magic Woman" as "I'm a black magic woman" to brilliant effect and turned in beautiful renditions of "Gypsy," "Dreams" and "Gold Dust Woman."

And she and McVie brought the night to a powerful finish with the encore-closing "All Over Again," an understated ballad from a '90s album that Nicks doesn't even appear on that somehow seemed the perfect way to say goodnight.