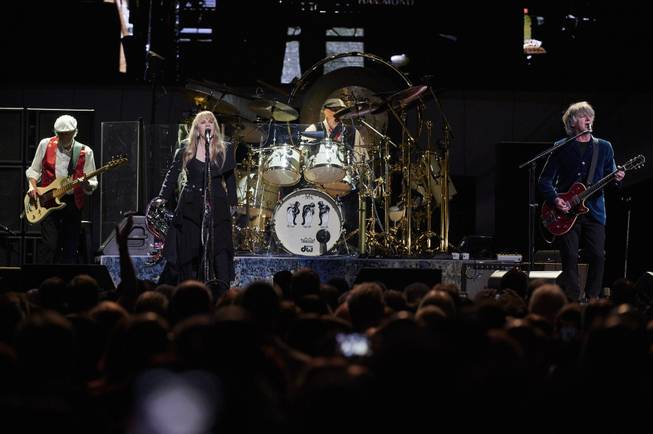 After Fleetwood Mac opened its T-Mobile Arena concert on Friday with the reliable, rollicking “The Chain” — a 1977 track from best-selling album “Rumours” that was used in the soundtrack for last year’s superhero epic “Guardians of the Galaxy Vol. 2” — singer Stevie Nicks reminded an already worked-up packed house that this was show 25 in the band’s “An Evening with Fleetwood Mac” tour. Then she suggested we all get this party started as the band rolled into 1987 hit “Little Lies.”

There wasn’t much stage banter after that as Fleetwood Mac plowed through two solid hours of music, mostly its many instantly recognizable hits from the ’70s and ’80s with a few earlier jams sprinkled through. The songs that prominently featured Nicks and her distinct, cozy voice elicited the greatest response from the jubilant audience, and sometimes she didn’t need to sing a note; Her mystical moves dancing across the stage during “Gold Dust Woman” was a late-show favorite. Other than a few brief intros to those old blues-rock numbers like “Tell Me All The Things You Do” and “Oh Well,” the music rarely stopped.

With backing players, the tour assembles a group of 11 musicians onstage and personnel has been a hot topic these days as guitarist, singer and songwriter Lindsey Buckingham, essential to Fleetwood Mac’s hit-making heyday, was booted from the band earlier this year and has since sued his former mates. Of course, feuds and other drama have always been part of the Mac’s mystique, but only a die-hard Buckingham fan could find any flaw in the Vegas concert as the energy remained high and the performance was fully satisfying.

Along with Nicks, founding members Mick Fleetwood and John McVie forming that trademark driving rhythm section and singer and keys player Christine McVie, the current lineup gets a fresh boost from Neil Finn, the singer and songwriter best known for his work with Crowded House, and Mike Campbell, a fiery guitarist recognized as Tom Petty’s right-hand man in the Heartbreakers. Both seized every opportunity to shine in their new supportive roles. An encore tribute to Petty of “Free Fallin’” put Campbell in the spotlight, and a tender, acoustic one-two punch of Finn’s “Don’t Dream It’s Over” followed by Nicks singing “Landslide” was a brilliant combination of two of everyone’s all-time favorite songs.

By the time Nicks and Christine McVie closed the short encore with the deep cut “All Over Again” from 1995 album “Time,” the audience was happy and exhausted, and after a few more grateful words from Fleetwood, another epic rock concert was inscribed in T-Mobile Arena’s history. Just four nights earlier, Metallica set the attendance record for a concert at the Strip’s biggest venue, playing for 20,428 fans. That’s a lot of musical memories in one Vegas week.