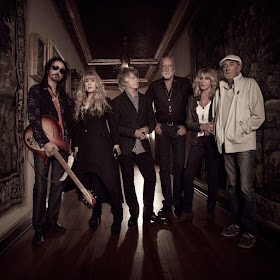 Mick Fleetwood remembers sitting backstage with Elton John, hearing about his plans for retiring from touring.

“He said, ‘No one believes me — not even my band,’ but as soon as my children are old enough to go to a proper school, I’m going to hang it up and be that parent that’s available for them,’ ” recalls Fleetwood Mac’s drummer and co-founder. “He’s keeping to his promise.”

It’s a question that a lot of Fleetwood’s contemporaries wrestle with. “For a while, the question was always: ‘Is this the Stones' last tour?’ But here they are going out again in grand style,” he says. “We have our own version of that in this band.”

And Fleetwood, 71, says there was a point last year when the members of Fleetwood Mac were battling about a tour that coincided with its 50th anniversary and wondering if it was time to hang it up as well.

“It was a huge deal that the band should change its dynamic this far down the road,” Fleetwood says. “We thought long and hard — though not too, too long because we knew we had to make our minds up. But we did some serious thinking about whether this was going to be end of the band really. We decided, the four of us, that was not going to be the case.”

Even that surprising announcement last April didn’t end the band’s worries. “Then the joyride and the not-knowing ride of ‘this has to be the right decision’ begins,” Fleetwood says. “And it only becomes the right decision with the right chemistry and the right players.”

With the first leg of the tour successfully in the books, Fleetwood says the band is pleased with its new course, as its tour reaches Madison Square Garden for shows on Monday, March 11, and  Monday, March 18. “We’re definitely all very happy,” he says. “We’re also blessed that the audiences have been beyond stellar and have come on this journey with the band on a level that’s beyond anything that we could have imagined. … But you can understand that going out at the beginning of this excursion, there was a lot at stake — a lot of musical integrity. We were just really incredibly fortunate we found two very talented gentlemen that fit incredibly well with the band and have a musical, fantastic story to tell in their own right.”

Of course, Buckingham may disagree, though the lawsuit he filed against the band in October has already been settled. “I’m not out there trying to twist the knife at all,” Buckingham told “CBS This Morning.” “I’m trying to look at this with some level of compassion, some level of wisdom.”

It’s a way of thinking that seems even more important as Buckingham recovers from open heart surgery in February that his wife says damaged his vocal cords. “It would be absolutely inappropriate if I didn’t briefly say that we are definitely relieved on many levels that he has prevailed with his health situation, with his heart attack,” Fleetwood says. “Obviously, it was a huge deal with the parting of the ways with Lindsey Buckingham.”

Fleetwood didn’t want to get into the details of the dismissal. “It’s no secret that many artists and bands have similar dynamics that they can’t talk about,” he says. “I mean look at The Beatles. … Things just happen. Some people are saddened. But rejoice in the fact that those elements in some shape or form all continued to do stellar work, as I’m sure Lindsey will in his own world and we will in our world. Life unfolds like that sometimes. We’re really enjoying the elements that we have now and the new dynamic. It’s a new day.”

Fleetwood says the band is enjoying its latest chapter, eager to try new things. They have already added “Don’t Dream It’s Over” from Finn’s band, Crowded House, and “Free Fallin’ ” from Campbell’s time with Petty into their sets. And they have brought Fleetwood Mac’s 1968 single “Black Magic Woman” back into its setlist, which Nicks rediscovered when Fleetwood performed it with his band in Maui.

“Stevie sees it and says, ‘Oh, my God, I love that song. I wanna do it,’ ” Fleetwood recalls. “And she did. And she does. It’s fun. It’s just a twist. It’s one of those songs that most people believe is not a Fleetwood Mac song. They would associate it with Santana. But it was written by Peter Green with John and myself back in the day with Jeremy [Spencer, from the band’s original lineup], so we have fun with that. And Chris gets a great rip around it. … A song like that gives her a chance to do something, in truth, that she hasn’t done in many years, which is get back to her roots and it’s of course very much in John and my backyard. And Mike couldn’t wait to be playing guitar on ‘Black Magic Woman.’ I think if there was any thought of not doing that song, I think Mike would have said, ‘You are not pulling that out of the set.’ ”

Yes, Fleetwood Mac hasn’t stopped thinking about tomorrow. “We’re very happy and we’re having a ball out here,” Fleetwood says with a laugh. “That’s something that we needed.”

EDGE OF HISTORY
Stevie Nicks is set to make history at the end of the month, when she becomes the first woman to be inducted into the Rock and Roll Hall of Fame twice.

Nicks was already inducted in 1998, along with the rest of Fleetwood Mac. And though she recently told Rolling Stone that she’s hopeful her second induction — this time for her solo career, which includes decades of hits including “Stand Back” and “Rooms on Fire,” as well as duets like “Stop Draggin’ My Heart Around” with Tom Petty and “Leather and Lace” with Don Henley — will “open the doors for women to fight to make their own music,” it wasn’t something she planned on.

“I never wanted a solo career — I always wanted to be just in a band,” she told Rolling Stone. “But I just had so many songs! Because when you’re in a band with three prolific writers, you get two or three songs per album — maybe four. But I was writing all the time, so they just went into my Gothic trunk of lost songs. … To this day, I write all the time.”

Mick Fleetwood says all of Fleetwood Mac plans to be at the Barclays Center ceremony on March 29 to support Nicks for her honor. “I am really happy for her,” Fleetwood says. “She lives and breathes everything. I always go, ‘When are you going to take a break?’ But she is Like Bob Dylan, or some such creature, they never stop. … She has completely dedicated her life to her art and she’s very happy doing it. Getting her to go on a little holiday somewhere is like pulling teeth. But it’s all great.” — GLENN GAMBOA