Fleetwood Mac reminds fans in D.C. that the chain can never be broken (even without Lindsey Buckingham)
By Rudi Greenberg | Washington Post | Photo Brent N. Clarke 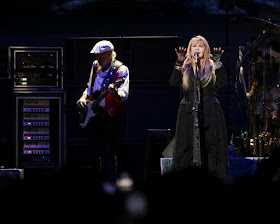 One way to interpret those setlist choices: as an expert-level troll of ex-bandmate Lindsey Buckingham, the singer and guitarist who was fired last year and replaced by Crowded House singer Neil Finn and Tom Petty & The Heartbreakers guitarist Mike Campbell.

It could also just be business as usual: The last time Fleetwood Mac played D.C. in 2015, when Buckingham was still in the band, the set began and ended with the same two songs.

Either way, it was hard not to feel Buckingham’s absence at times on Tuesday, even if his name was never uttered by anyone onstage at Capital One Arena.

Fleetwood Mac is currently on the second leg of its first tour of the century without Buckingham, who previously left in 1987 before returning a decade later. (The tour returns to the area at Baltimore’s Royal Farms Arena on March 23.) Of course, this is a band that has weathered numerous lineup and stylistic changes over the decades, with drummer Mick Fleetwood and bassist John McVie the only constants throughout the majority of the group’s 50-plus year run.

With Buckingham out of the picture, singer Stevie Nicks took an even more prominent role than usual, singing lead on most songs and drawing the largest ovations from the audience, especially on such hits as “Dreams” and “Rhiannon.”


Finn and Campbell managed to hold their own filling Buckingham’s shoes, and at times, Finn’s vocals sounded eerily close to Buckingham’s, particularly during “The Chain” and “Second Hand News,” in which he even played the kind of smaller-bodied guitar Buckingham favors. Campbell didn’t seem to be trying to mimic classic solos, instead adding his own flair to the bones of these songs.

It wasn’t until the end of the night — “Go Your Own Way” and “Don’t Stop” in particular — that Buckingham’s weird, almost standoffish energy felt missing.

This version of the band, however, seemed to take more chances, even choosing to dip into the pre-Buckingham-Nicks era, when former guitarist Peter Green was the leader and the group was more of a blues-rock act. In introducing “Black Magic Woman,” Nicks admitted that for a time, she didn’t even realize that the song, which was popularized by Santana, was by her band.

“I was in Fleetwood Mac but didn’t know that they wrote this,” she said before singing it, as she put it, “through the eyes of a woman, since this is the second year of the woman.” Her version energized the standard with a sultry swagger.

Campbell even got a chance to sing lead on another early Mac blues song, “Oh Well,” which he dedicated to President Trump and punctuated with a fiery guitar solo.

Fleetwood, Nicks and singer-keyboardist Christine McVie each took time to praise their new bandmates, with Fleetwood introducing a cover of Crowded House’s “Don’t Dream It’s Over” as a song that “hit my heart when I needed it.”

Finn started the song acoustic, aided by the band’s auxiliary backing musicians (which included two singers, a percussionist, a second keyboardist and a third guitarist) before Nicks joined in, with cellphones lighting up the arena.

Campbell’s old bandmate Petty also got a nod during the encore with a faithful if rote, Nicks- and audience-sung take on “Free Fallin’.” (Why the band chose that over the Petty-Nicks collaboration “Stop Draggin’ My Heart Around” is a mystery.)

The encore ended with the obscure “All Over Again” from 1995’s “Time.” Co-written by Christine McVie (and sung here as a rare duet with Nicks), the song had never been played live before this tour. At the time, the song was viewed as McVie saying goodbye to the band, with lines like “Well it’s time to move on to the rain/ And finally break the chain.” Here, it was hard not to view it as an allusion to Buckingham’s departure and a reminder that even if the bond between members may sometimes fall apart, it’s never truly broken.
Nickslive at Friday, March 08, 2019
Share