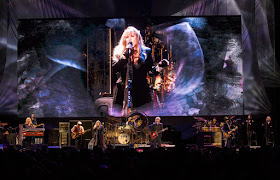 Having recently settled a lawsuit brought against them in October of last year by former guitar player Lindsey Buckingham, who was fired from the group at the beginning of 2018, Fleetwood Mac is back on the road for the second leg of their “An Evening With Fleetwood Mac” tour, which runs across the U.S. through April before heading abroad with dates into September.

All of which is just the latest chapter in a book that’s been defined by conflict over the course of much of the group’s 52 years.

But what’s defined the most recent twist is just how much fun Fleetwood Mac seems to be having on stage in its latest formation. It was easily apparent on the first leg of the group’s tour last year and it was obvious again on stage Friday night in Chicago.

“This is night 13,” observed Stevie Nicks on stage at United Center in the tour’s second week. “Things might get a little witchy," she added in characteristically mischievous fashion.


Like the 2018 road trip, this run of Fleetwood Mac American dates functions as a look at the group's path forward, following the addition of Campbell and Finn, while looking back at its earliest days.

This time around, the focus is narrowed a bit. Last year, the group performed cuts like "Tell Me All the Things You Do" and "Hypnotized" for the first time since 1977. Those deep cuts are missing from this current setlist. But there's still gems dating back to the group's earliest days as Peter Green's Fleetwood Mac in the set.

"So this next song, we're going back into our history of Fleetwood Mac," said Stevie Nicks, admitting that when she first joined the group in 1975 she knew "Black Magic Woman" only as a 1970 hit for Santana, unaware it was actually released as a Fleetwood Mac single first in 1968, written by Green who left the band in 1970.

Guitarist Mike Campbell remains perfectly content to cede center stage to his bandmates. But he seemed more comfortable on stage Friday night in Chicago and nowhere was that more apparent than on "Black Magic Woman," as he made his way across the stage, facing Nicks while slaying his solos on the track.

The performance was an early highlight as Neil Finn and co-founding bassist John McVie turned to face drummer Mick Fleetwood, the song's pace shifting as Christine McVie took over on keyboards.

"How about Mike Campbell on the guitar?" asked Christine McVie of the crowd. "How about Christine McVie on the piano?" replied Finn. It was a great example of the genuine affection this new lineup seems to share, smiling throughout the drawn out jam.

While Campbell is happy to let his guitar do the talking, Finn is a bit flashier, more closely resembling some of the qualities fans came to love in Buckingham over the decades, handling the Lindsey vocal on songs like "Second Hand News," "Monday Morning" and "Go Your Own Way" Friday in Chicago.

He was also particularly effective opening the group's take on "World Turning," which turned into an exhausting Mick Fleetwood drum solo saved by the scorching slide guitar of Mike Campbell to close it out.

Campbell once again led a stripped down, six-piece Fleetwood Mac in a look at, arguably, the group's most resonant early hit, 1969's "Oh Well."

"Welcome to the middle of the show," Campbell joked, embracing his role as de facto temporary emcee, playing Friday's fans against the October crowd, firing it up, before putting the group's blues roots on full display.

But it's the hits that keep fans coming back regardless of who is or isn't in the band at any given moment and Fleetwood Mac is acutely aware of that.

Once again, Rumours was the group's most represented album and Friday's show got underway with "The Chain," "Little Lies" and "Dreams," cruising toward the end of the main set with "You Make Loving Fun," "Gold Dust Woman" and "Go Your Own Way."

Nicks has become the face of the group and does a great job introducing fans to Fleetwood Mac's newest members, joining Finn on vocals during a cover of Crowded House's "Don't Dream It's Over" and handling lead vocals during the encore, putting a Fleetwood Mac spin on "Free Fallin'" as images of Tom Petty ran on the video screen.

It was far from the only moment Campbell's jangly guitar fit perfectly Friday. He was particularly effective channeling the Byrds while adding his own flavor to "Say You Love Me."

Buckingham's main point of contention since being ousted from Fleetwood Mac seems to be the way in which he perceives the group to have tarnished its legacy moving forward with a new lineup reliant on the hits at the expense of new music.

As fans continue to turn out in droves, and the group turns over a new page on stage, continuing to gel with an apparent camaraderie that's been otherwise lacking on recent jaunts, the only question would seem to be how the Fleetwood Mac story ends. 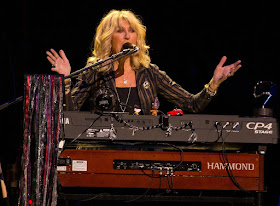 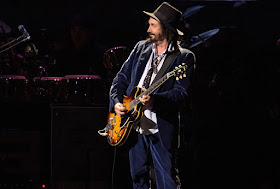 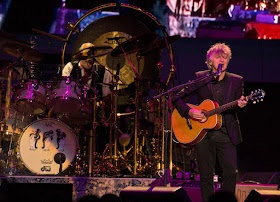 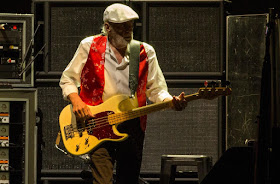 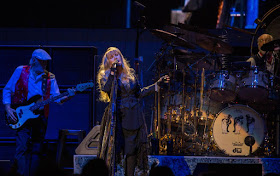