Fleetwood Mac at Wembley Stadium — has the chain been broken? 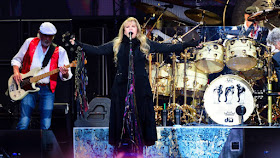 After 52 years the band can still sell out Wembley Stadium but the latest line-up change may be a rupture too far.

A tour by one of the biggest bands in rock history is always notable, but “An Evening with Fleetwood Mac” might have been particularly special. When it was conceived, there were suggestions that it could have been Fleetwood Mac’s swansong. A new album was in the offing too, a final recording. But the band’s penchant for volatility has once again intervened.

It is the second tour since Christine McVie officially rejoined their ranks in 2014. The keyboardist-singer played a key role writing some of their biggest hits, and the new Fleetwood Mac album was to have been written by her and guitarist-singer Lindsey Buckingham. But singer Stevie Nicks did not want to record a new Mac album, so instead it appeared under McVie’s and Buckingham’s joint name in 2017.

The next twist came with Buckingham’s exit from the group, reportedly after reigniting his long-running feud with his ex-lover Nicks. He stomped off to play solo shows in the US last year, where his setlist included a pointed rendition of the Fleetwood Mac song “Never Going Back Again”. Meanwhile, his septuagenarian former bandmates are touring the world with a nostalgia-circuit setlist and no talk of farewells.


Two Wembley Stadium shows mark the end of the European leg, with Australia next up. The first night opened with the Mac and their touring musicians walking on stage without razzmatazz, the very image of a working band. The sound was a steady-as-she-goes drumbeat, played by Mick Fleetwood, the bearded, ponytailed, affably piratical mainstay who has been in every line-up of the band over the course of its convoluted 52-year history.

By his side in white flat cap was bassist John McVie, the “Mac” of the band’s name. He stood rooted to the spot, thrumming out a muscular passage of notes during opening track “The Chain”, but otherwise content to play a background role. However, he seemed to sway forwards, almost uprooting himself, during Nicks’ turn in “Black Magic Woman”, as though magnetised by her inimitable stadium-rock version of the feminine divine. She stood out front, flanked by Christine McVie, John’s ex-wife, who played keyboards. Across the stage from them were Buckingham’s dual replacements: lead guitarist Mike Campbell, formerly of Tom Petty’s backing band, and vocalist and rhythm guitarist Neil Finn of Crowded House.

There were complaints about the sound quality, although it was fine from where I was sitting. High ticket prices had not translated into a large-scale production: the staging was basic, even routine. Fleetwood’s old-school 10-minute drum solo with second percussionist Taku Hirano was the most elaborate moment.

Christine McVie sang her vocal parts with appealing clarity, although she was the least forceful of the various vocalists. Nicks was in great voice, warm and amber in tone, smoothly going through the gears as songs such as “Rhiannon” grew in volume. She kept her whirligig dancing to a minimum, only going full West Coast shaman during “Gold Dust Woman”. Perhaps the absence of her frenemy Buckingham had an oddly inhibiting effect.

Campbell did the missing Mac man’s guitar solos efficiently, while Finn sang gamely and leapt about in willing approximation of Buckingham’s outré stage energy. But it lacked a spark. In their heyday, Fleetwood Mac, the band of cocaine and divorce, had a gift for turning complicated emotional scenarios into persuasive and exhilarating soft-rock. But the sight of Buckingham’s stand-in singing “Someone has taken my place” in “Second Hand News”, a track written by Buckingham about an ambivalent relationship at a time when he was in one with Nicks, was a rupture too far.