Fleetwood Mac review, Wembley Stadium: Band perform with too much zest for this to be a simple exercise in nostalgia
It is difficult not to occasionally feel the lack of guitarist Lindsey Buckingham, less for his guitar wizardry than for the tense, loaded chemistry he always shared with ex-partner Stevie Nicks 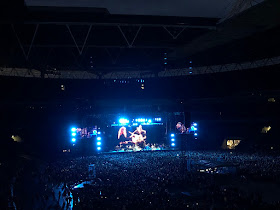 “It’s unbelievable that we’re all still doing this,” proclaims Mick Fleetwood from behind his vast drum set onstage at Wembley Stadium. The “all” isn’t quite accurate – for one thing, guitarist Lindsey Buckingham was unceremoniously ousted from the band last year, reportedly after smirking at Stevie Nicks – but he has a point nonetheless. Fleetwood Mac have come to the brink of self-destruction more times than there are people in this enormous stadium.

Fifty-one years after the band first formed (though Mick Fleetwood and John McVie are the only founding members remaining), this is “the 61st show of a long trip we’ve been on since September”, announces Stevie Nicks. She says so with just a hint of weariness – the energy, at first, is a little fatigued, the first few songs sung seemingly by rote. But things take a turn by the time “Second Hand News” comes around, taken from their seminal 1977 album Rumours, which was recorded when the band were tied up in romantic knots and barely speaking to each other. Nicks, an occult leader all in black, suddenly clicks into gear, air drumming along to Fleetwood’s hugely impressive percussion.


Fleetwood, meanwhile, has appointed himself not only drummer but official hype man of Fleetwood Mac. A protracted drum solo – helped along by some Afro-Cuban percussion courtesy of Taku Hirano – gives the rest of the band an opportunity for a break, but the 71-year-old appears incapable of tiring. He grows increasingly manic as he yells rabble-rousing orders: “Give me some!” “Don’t be shy!” “Keep it nice and easy, nice and smooth!” Just as it all seems to be coming to an end, he glugs some water poured into his mouth by a crew member, stands up, and begins to march around bashing on a single drum instead. There are, apparently, sound issues in some corners of the stadium – so much so that there are reportedly a number of walk-outs – but even those people couldn't fail to hear Fleetwood's deafening battle cry. “Much fun was had by all,” he declares, a little presumptively, when it does finally end – but he’s right. That this ridiculously extended interlude has managed to whip up, not turn off, the crowd is a mark of his extraordinary showmanship.

It is difficult not to occasionally feel the lack of guitarist Lindsey Buckingham – who is valiantly replaced by both Crowded House’s Neil Finn and Tom Petty and the Heartbreakers’ Mike Campbell – less for his guitar wizardry than for the tense, loaded chemistry he always shared with ex-partner Stevie Nicks. “Go Your Own Way” was written by Buckingham when the pair were breaking up – having to sing backing vocals on the line “packing up, shacking up’s all you wanna do” was always a particular bugbear for Nicks. She got her own back with the bitter, beautiful “Dreams”, written at the same time: “Listen carefully to the sound of your loneliness.” Even years later, there was nothing quite like seeing them perform the songs together. Still, Finn and Campbell might not spark fireworks with Nicks, but they fit in seamlessly.

“I wrote this next song when I was 27,” says Nicks of “Landslide”, chuckling at her younger self’s premature declaration that “I’m getting older, too”. Minus Buckingham’s replacements, the band are all in their seventies now; and while it is indeed a miracle that they have made it this far, there have been very few attempts at new music this century. Sunday night’s show, though, doesn’t feel like a simple exercise in nostalgia – it is performed with too much zest and vigour for that. Time makes you bolder, after all.
Nickslive at Thursday, August 08, 2019
Share