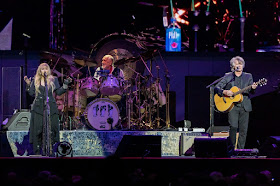 How do you know when a band is ubiquitously iconic?

When the opening notes of practically every song they play are instantly recognisable to fifteen thousand people whose ages and backgrounds range from teens to pensioners, and across all demographics.

It sure doesn’t hurt that the noticeable absence of Lindsey Buckingham (hey – vocal harmony combinations like his, Stevie Nicks and Christine McVie are one in a billion) is brilliantly filled by not one but two guitarist/singers with almost as impressive careers as theirs.

Mike Campbell, sidekick to Tom Petty in The Heartbreakers even before that band formed, is a laid back presence on the stage, and Neil Finn – of Split Enz, Crowded House and solo fame – needs no introduction, especially in this neck of woods, and he enjoyed a rousing cheer at every turn.

Anyway, this is one band which is no stranger to radical personnel changes, and their early, bluesier days with founding guitarist Peter Green get a very welcome revisit tonight with a darkly gothic take on Black Magic Woman, Nicks re-purposing the lyrics from the titular woman’s perspective, and a raunchy romp through Oh Well with Campbell taking the lead vocals and him and Finn tearing it up with a fiery guitar rough n’ tumble.

Nicks, McVie and Finn share lead vocals, rotating through one classic after another, each with their own distinctive style, always with the rock solid rhythm section of Mick Fleetwood and John McVie – the duo from whom the band’s name was derived – behind them.

Whilst McVie has the warmer, more inviting, voice (albeit wearied by their grueling tour schedule as the night goes on), it’s Nicks who brings something ethereal and magical to everything she sings. It’s no surprise, when given the option of sacking Buckingham or Nicks leaving, that they said farewell to her former paramour.

Nicks tells the full-to-the-brim RAC Arena that this, the first show of the Australian leg of their ongoing tour, is the new line-up’s sixty-third show together, and they couldn’t be tighter or more razor sharp.

Having the opportunity to hear Neil Finn singing his Split Enz smash I Got You, with Stevie Nicks and Fleetwood Mac, while Frankenstein pics play on the big screen… well, let’s just say it was a special moment. In his own words, “who’d have thought!”

Clad in a sparkling shawl and topped by her radiant golden mane, whilst behind her footage of wild horses galloping through a river as free spirited as her gypsy heart, Nicks makes Rhiannon a spine-tingling moment.

Madcap Mick Fleetwood’s drum solo, whilst a far cry from his body-slapping drum-pad boiler suit turns in the ‘80s, is accompanied by “master drummer” Taku Hirano on all manner of percussion and punctuated by Fleetwood’s exhortations which are part words, part grunts, and a lot of fun. As shit as every drum solo always is, without exception, this one was pretty entertaining, especially when he stalks the front of the stage with an African drum over his shoulder, in front of footage of many of his younger selves.

A little later Fleetwood gives Finn a heartfelt fanboy introduction for his classic and beautiful Crowded House song Don’t Dream It’s Over, and with phone lights held aloft right around the crowded (RAC Arena) house, when Nicks takes the mic for the second verse, it’s another chillingly special moment. Wonder how they can top that? Try Nicks singing Landslide accompanied only by Finn’s acoustic guitar and Neale Haywood’s rhythm guitar. Beautiful.

You Make Loving Fun is another McVie showcase, while Nicks brings even more esoteric magic for a wonderful rendition of Gold Dust Woman, and Finn leads a rousing end to the main set with Go Your Own Way, loads of people on their feet and singing loudly.

The encore is proof that this new, bigger Mac is more open to mixing things up. First up is a beautifully touching tribute to Campbell’s late friend and bandmate Tom Petty, sung by Nicks, who famously duetted with him on Stop Draggin’ My Heart Around. That song doesn’t get an airing tonight, but Free Falling does, and the crowd lap it up as much as any of the many classic Mac songs in the set list. Most present know the connection and how important Petty was to everyone on stage, especially Campbell and Nicks.

Finally, (ironically) Don’t Stop, sung by all three frontpeople, and the icing on the cake after a brilliant gig, before the band take a bow and Fleetwood stays on stage for a closing monologue, choking on emotion as he bids us all to not only be happy, but to be kind in these crazy, strange days. He’s played off stage by a tape of Peter Green’s wonderful Albatross, another nod to the earliest of days of The Mac.

Fleetwood Mac 2019 deliver a show with something for everyone, rather than merely focussing on the pop era of the band, and the two guitarists bring a very welcome rock and roll edge to the normally much more polished Mac sound. Frankly, the whole ensemble seem envigorated by the new blood, they seem more vibrant and – perhaps unusually for this most complex of band, whose core members have all had affairs with each other over the years and whose best work was often written about their own life’s turmoils – they seem happier than ever. Now get into the studio and make something new and amazing… please?