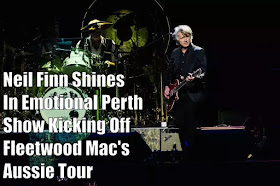 Is there any band that has undergone more line-up changes, infighting, break-ups and love-ups than Fleetwood Mac? 52 years together with 19 line-up changes in that time, it was the years between December ’74 and August ’87 where the hit machine was in its most prolific and popular form.

It was this configuration (almost!) we got to see on Friday evening. Mick Fleetwood, John and Christine McVie and Stevie Nicks were all present. Who wasn’t, however, was the recently and unceremoniously dumped Lindsey Buckingham. Not surprisingly, this void could not be replaced by a single individual, instead vocal and rhythm guitar duties were taken by Neil Finn (Split Enz/Crowded House) and Mike Campbell (Tom Petty & The Heartbreakers).

With no opening act and the RAC Arena at full capacity, Mick Fleetwood took to the stage to a roar of applause. A giant screen behind projected footage of his foot laying down the opening beat to The Chain while the rest of the band and backing performers took their places.

It was a simple stage layout with minimal decorations but it worked to keep the focus on the performers.

Sadly “songbird” McVie’s performance over the night seemed a little sub-par. Her voice fell flat and broke in parts. It was hard to tell if this was an equipment or acoustics issue, or she was just having a bad night. It was a similar case for Nicks, but her voice seemed to warm up and found a happy balance.

Nicks offered a warm welcome the crowd, explaining this is the 63rd show in the tour and the first for the Australian leg. In a flowing couture gown, with ribbons and knee-length high heeled boots, she owned the stage throughout the entire set, pirouetting across from performer to performer, playfully dancing along as they jammed on.

With hit after hit, Little Lies rolled into Dreams which rolled into Say You Love Me. McVie and Nicks took turns with crowd favourites, those around us singing along and dancing in their seats, but it was Black Magic Woman that was the true highlight of the night.

Knowing they were Down Under, and what Neil Finn (as an adopted Australian) meant to the audience, we were treated to not one but two Neil Finn originals. The Split Enz hit I Got You had a huge reaction with most of the audience on their feet. However, it was the acoustic version of the Crowded House classic Don’t Dream It's Over performed as a duet with Nicks that captivated the audience. Hundreds of cell phone lights and lighters swayed back and forth as the two singers played off one another.

Not to be outdone by the rest of his bandmates, Mick Fleetwood took centerstage (literally) with a ten-minute drum solo mid World Turning. In true rock'n'roll fashion, he had a roadie pour a beer into his mouth, refusing to stop bashing the skins.

With the rest of the band returning to the stage, we got a chance to witness Campbell's incredible blues skills on the guitar. He and Finn were all smiles during a rendition of Oh Well. Finn really seemed like he couldn’t believe he was on stage with the Mac.

The end of the main set was filled with more fan favourites. Hold Me, You Make Loving Fun and Gold Dust Woman kept the momentum going, but it was set closer Go Your Own Way that got the whole audience to their feet and dancing. Finn bounced about the stage giving Nicks a run for her money, twirling like a giddy school boy.

After a blink-and-you'll-miss-it break, the band came back for a quick encore. Opening with the Tom Petty classic Free Fallin', it was bittersweet as the screen showed pictures of Campbell, Nicks and co performing and hanging out with Petty and the rest of the Heartbreakers. It was a beautiful tribute from the band.

The closer Don’t Stop really showed why this band has such staying power. Although the audience definitely skewed older, there were plenty of younger faces dancing along as the last notes strummed out. Mick Fleetwood took the time to thank the audience and reminded them to love one another.
Nickslive at Saturday, August 10, 2019
Share