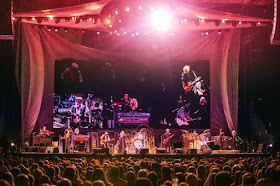 Walking into Brisbane’s Entertainment Centre, what looks like netball training is just wrapping up. Teens in lycra stream out of the adjacent sports complex and we overhear one ask another, “Who’s playing tonight?”

“Dunno, some old-school band,” they reply.

There’s a completely different vibe in the room by the time we take our seats, a wholesome group nearby welcoming us to their “concert family”, forewarning there will be plenty of dancing. No complaints here, it’s Fleetwood Mac after all – shawls and twirling are a given. We overhear parents congratulating one another for bringing their kids and raising them right and bets are made as to what the opening track will be. “You can Go Your Own Way home because it won't be The Chain...” It's The Chain.

And what a way to start. Lindsey Buckingham’s absence doesn’t seem to phase the crowd (another overheard moment: “I can live without Lindsey but I can’t live without Christine”) and his replacements, the beloved (adopted) Australian Neil Finn and Heartbreaker Mike Campbell, slot into the mix effortlessly.


Mind you, by the 67th show of the world tour you would hope so. The rest of the gang are there – “eternal romantic” Stevie Nicks, “songbird” Christine McVie and “the backbone of Fleetwood Mac”, John McVie – introduced by the big man behind the kit himself, Mick Fleetwood.

It’s a night full of hits, a subtle sidestep around Tusk, the band heavily leaning on Rumours, as audience singalongs fill the auditorium. Black Magic Woman is an early highlight, Nicks powerful in her performance, Campbell impressing on lead guitar. Nicks introduces the track by saying, “We’d like to do this song through the eyes of a woman – the way it should be.” Hear, hear.

With over two hours of songs that have been ingrained in the very fibre of our beings – Rhiannon brings tears, Everywhere sees the crowd attempt the high notes McVie and Nicks can no longer hit – many duck out to grab another round at the bar while Fleetwood grunts and hollers his way through an extended drum solo. Can anyone understand what he is saying? Impressive nonetheless, the man is 72.

There are plenty of tender moments, tales of Nicks watching Split Enz on MTV in 1981, Fleetwood swooning at the importance of Crowded House’s Don’t Dream It’s Over. Phone lights sparkle as Finn begins the track acoustically only to be joined by Nicks, who later says that songs like this only come along once in a lifetime. We reckon the same could be said about a fair few in the Mac cannon. It's a special moment. Landslide is dedicated to everyone in the room and the band pay tribute to Tom Petty with an encore rendition of Free Fallin’ .

With a bow and a standing ovation, the band exit stage left leaving Fleetwood to holler, “Ooooh yeah,” one last time. “I promised I would never leave the stage without saying the following,” he ends the night. “Take care of yourself, but, more importantly, in this seemingly strange old world, remember to be kind to one another. We love you so very much.”

Watching Danny Boyle’s Yesterday earlier in the year made us dream about our own "world without The Beatles" moment – what artist's catalogue do you wish you wrote? A band as eternal as Fleetwood Mac would have to be a serious contender. 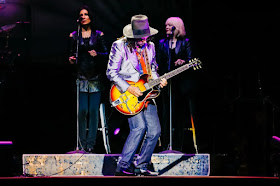 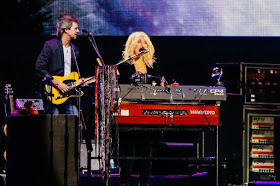 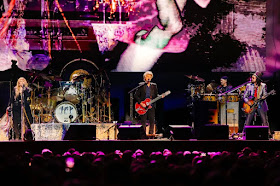