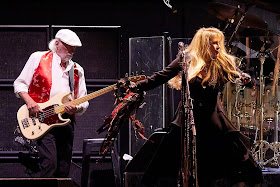 There’s charisma, there’s star power and then there’s Stevie Nicks. Dear gawd she’s cool. She didn’t even have to do anything other than walk onto the stage at Sydney’s Qudos Banks Arena for me to feel it in every fibre of my deeply uncool bones.

I’d been pretty excited to see Fleetwood Mac live, despite not being a purist. I don’t know the deep cuts,

heck, I don’t even really know the mid cuts, but I really love the band’s hits. And that’s what I was there for.

So I applauded with appropriate enthusiasm when new guitarist, and ex-Tom Petty’s Heartbreaker, Mike Campbell walked on stage clad in the rockstar attire of a zebra print jacket, crimson shades and wide-rimmed hat. I gave Neil Finn a hometown holla as he took up his new residence at the front of the stage, and the longstanding duo of bassist John McVie and drummer Mick Fleetwood got a cheer.

But then Christine McVie and Stevie Nicks walked out and the whole room swooned and I felt something like a cosmic gut punch. It was powerful and visceral and stopped me in my claps. Feeling the collective energy of 21,000 people all simultaneously in total awe and slightly gobsmacked is a trip, man.

Wondering if it was just me, I spoke to a few people after the gig and, without exception, they all agreed. Whatever it was, it was real. Black magic woman? Perhaps.

And then they started playing. Fleetwood Mac opened with the bluesy stomp of The Chain and hot damn . . . it was so thunderously propulsive that they threatened to blow the roof off the place.

It was immediately apparent that this was not a band going through the motions. This was a band energised, passionate, playing for keeps. They certainly didn’t sound, feel or perform like a band whose four main members are all in their 70s.

Fleetwood, in particular, is just an absolute monster on the drums. He smashes the living daylights out of his kit, whoops into his mic, constantly plays up to the camera that’s locked on him for the night and amply displays why he’s one of rock’s most revered drummers. He also genuinely looks to be having a blast. His playing is so full of innate feel, sneakily delivered fills that come out of nowhere, and a groove that’s just rock solid.

Not only that, the dude pulled off the unthinkable, playing an extended solo — an actual drum solo — that was not only wildly entertaining but also a hugely thrilling ride. As he smashed out a colossal groove his head was flung back, eyes closed tight, sweat flying, arms thrashing, and his grin ever widening as he repeatedly shouted out “unleash the hounds!”. Chaotic, mad, brilliant.

No matter what era Mac they played, his groove effortlessly locked in with John McVie’s no nonsense bass to anchor the band. Vocalist and keys player Christine McVie’s 80s pop gems were true show stoppers, even if one comes right at the start, and whenever she busted out a gritty bluesy solo on her Hammond, look out.

Meanwhile Campbell, shredded and strummed with purpose, his flaming, ferocious fretwork sizzling through every solo and igniting the songs.

Finn, obviously, was great. Slotting in with ease and making it feel like he’s always been there. If you want to feel your mind blow, then watching Fleetwood Mac cover Split Enz is a sure-fire way to make that happen. If, somehow, having those seven worlds collide doesn’t fry your brain, then later when they cover Crowded House and Nicks takes lead, well, that absolutely will.

It’s Nicks who captivates the whole night with her sheer mysterious magnetism. Despite being clad in trademarked witchy black, the shining light of her star power is blinding, as she delivers her soul into the songs and hypnotises with her famed whirling dervish dancing.

They played all the hits I was hoping to hear, dropped a few surprises (I did not see those covers coming) and made the outside world completely disappear for almost three hours.

Purists may bemoan the recent unceremonious firing of vocalist/ guitarist Lindsey Buckingham, but his replacements have lent Fleetwood Mac a real edge. Yes, some of the high notes aren’t as high, and, yes, sometimes the energy dips, but there’s far more moments where your heart skips, moments where the raw emotion overwhelms, moments that make you smile like a giddy loon and moments that leave you struck dumb, frozen in something approaching awe.

It’s a pretty bloody good show is what I’m saying. And you bet I’m going again when they begin their four-show residency at Spark Arena in a couple of weeks. I’d suggest you do the same.
Nickslive at Thursday, August 29, 2019
Share