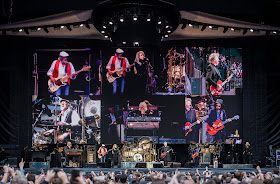 
Lindsey Buckingham’s absence casts a pall over a singalong show, despite sterling work from subs Neil Finn and Mike Campbell

There is no arguing with the numbers. Wembley Stadium is brimming with fans, even on a wet Tuesday. A dozen people fill the vast stage, reproducing some of the most opulent harmonies and venomous kiss-offs of the late 20th century. On Dreams, a bittersweet classic written by an enduringly swirly Stevie Nicks, a chandelier descends from the rigging. Amusingly, it goes back up afterwards, reappearing and disappearing with every one of her compositions on the final night of Fleetwood Mac’s European tour.

Superfan Harry Styles has brought his mum, Nicks reveals, complimenting her on what a well-brought-up young man he is. Super-producer Jimmy Iovine (Tom Petty and the Heartbreakers, Nicks’s 1981 solo album Bella Donna) has flown over from the States, she says. The Fleetwood Mac setlist – barely varying from Berlin to London – is replete with peak-period hits and refreshed by a couple of deeper cuts. One, the Peter Green-era blues Black Magic Woman, made famous by Carlos Santana, finds Nicks vamping her way through a female reading of the tune as the chandelier glitters darkly.

You can’t help but wonder, though, what constitutes a quorum in Macworld – a notoriously fickle place, which has seen a number of key personnel go missing. The reunited classic 70s lineup of Mick Fleetwood, John McVie, Stevie Nicks and Christine McVie (back in the fold since 2013) has been touring for a year without guitarist and songwriter Lindsey Buckingham. Fleetwood asked Buckingham to join his band in 1974. Buckingham assented, but only if he could bring Nicks. The results were immediate: two of the biggest albums in rock history, sacks of cash, dangerous liaisons, mucous membranes caked in “booger sugar”.

The Chain is pretty much the only song this schism-prone outfit ever wrote together. As its bass riff booms out across the stadium, keeping the rain at bay, two new links join this fraught concatenation. Loudest to look at is lead guitarist Mike Campbell, a man whose big-hat-and-shades combo nods to Slash from Guns N’ Roses even as his bright yellow raincoat channels Paddington Bear. He is an old friend. Campbell was the late Tom Petty’s guitarist in the Heartbreakers, played on Nicks’s Bella Donna, and, incidentally, also co-wrote Don Henley’s fantastic non-Eagles 80s hit, The Boys of Summer. (Henley and Nicks had a Rumours-era relationship.)

Campbell’s role is to play “maverick lead guitarist” in someone else’s band, unspooling solos and abetting a cover of Petty’s Free Fallin’, sung by Nicks, in the encore. The brightly attired American also provides something for the eye to follow in what is largely a static band. The exception is Fleetwood, the 6ft 5in court jester of British blues-rock, whose open-mouthed “drum-face” is plastered all over the giant screens as he solos at length in the middle of World Turning, the kind of carry-on punk was invented to destroy. For the latter half of the solo, Fleetwood straps on an African talking drum and faces off against percussionist Taku Hirano, prompting a mass exodus to the bar, and air punching in roughly equal measure.

Then there’s Neil Finn of Crowded House, tasked with rhythm guitar and vocals. He sings lead on his own composition, Don’t Dream It’s Over (“this is a song of unity, without a trace of irony”), which gets one of the biggest singalongs of the night, and all of Buckingham’s songs, starting with Second Hand News. “I know there’s nothing to say,” the song goes, resignedly, “Someone has taken my place.”

Last year, just when it seemed the sordid telenovela of Fleetwood Mac could provide no further twists, the band kicked Buckingham out, reportedly at the behest of Nicks. Flashpoints reportedly included Buckingham’s desire to tour his own solo album around the Fleetwood Mac world tour dates, and that he “smirked” behind Nicks as she gave an acceptance speech at a gala performance.

Nicks announced, via the band’s manager, Irving Azoff, that she never wanted to share a stage with Buckingham again, and issued Fleetwood Mac with an ultimatum: him or her. Buckingham sued the band and the spat was settled out of court in December for an undisclosed sum.

Who knows what else lies beneath this drama, but the band’s latterday tensions predate 2018. In 2013, the long-absent Christine McVie began performing with the band again, prompting an EP of new songs. Tonight, she shakes a tasselled maraca, or sits regally behind her massive keyboard, no shirker in the hits department. Her song Everywhere provided this 70s band with one of its most enduring 80s moments, and it remains one of the standing-up moments of tonight’s often sit-down set.

But even with McVie back in the fold, no new Fleetwood Mac album appeared in 2014, or 2015, or 2016. Instead there was a 2017 Buckingham/McVie offshoot record on which all band members appeared except Nicks: something in the reunion had soured even then. Events took a yet more dramatic turn in February, when Buckingham had open-heart surgery. He’s back on his feet, but question marks hang over his voice, potentially damaged by a tube inserted into his throat.

Even by the standards of a band notorious for infighting, Buckingham’s excommunication feels cold. The crowd, though, are perfectly happy to sing along with Finn, the affable New Zealander, rather than fold their arms in protest at the nixing of the prickly Californian author of Go Your Own Way, perhaps Fleetwood Mac’s greatest hit. Coming at the end of the set, it’s one of the songs everyone came to slosh beer to. Yet even though it’s delivered note-perfect, with two incandescent performances on guitar from Campbell and Finn, you can’t help but conclude that Fleetwood Mac have made a brutal if essential calculation in going their own way. The squad could tour the world without Buckingham, but not without Nicks, the face of the band, the one with the most successful solo career, and their most valuable player. This is a band who, after all, never stop thinking about tomorrow. 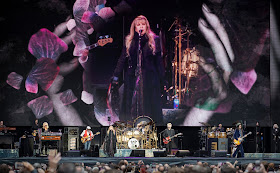