Fleetwood Mac review – latest lineup makes loving them fun
Having weathered the acrimonious departure of Lindsey Buckingham, Fleetwood Mac seem to be enjoying themselves more than ever 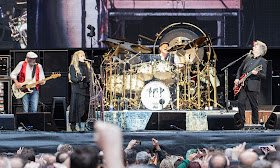 Happy Father’s Day, London,” offers guitarist Mike Campbell, one of Fleetwood Mac’s two new recruits. “I know,” he adds meaningfully, “there are some fathers out there.” There certainly are, but perhaps not as many as you’d think. The crowd packing out Wembley to see what – at a conservative estimate – is something like Fleetwood Mac’s 13th lineup is far from entirely comprised of the middle-aged-to-pensionable.

If you want proof of how wrong the recently departed Lindsey Buckingham was when he suggested the band were “incredibly unhip”, here it is – fans visibly too young to remember Fleetwood Mac’s late-80s resurgence with Tango in the Night, let alone the release of Rumours; twentysomething women dressed up as Stevie Nicks in top hats and scarves. On stage, the actual Stevie Nicks – no top hat, but very much dressed up as Stevie Nicks – is dedicating Landslide to Haim, one of umpteen latter-day bands under the spell of the music Fleetwood Mac made 40-odd years ago.

She says that Haim, too, might be on stage in their 70s, to which the obvious response is: only if they write more songs like these. Little Lies, Dreams, You Make Loving Fun – they’re built to withstand anything, from human resources issues to the sound at Wembley, which tonight recreates the experience of trying to listen to Fleetwood Mac with your head submerged in a tureen of soup. The visuals appear to be broadcast direct from Nicks’s brain – trees silhouetted against misty moons, stallions galloping through the surf in slow motion, mysterious ladies holding crystal balls etc – but more striking is the atmosphere emanating from the stage.

Over their 52-year career, being a member of Fleetwood Mac has always looked like a fraught business, but tonight, at least, they seem to be enjoying themselves. Mick Fleetwood is a constant blur of eye-popping, tongue-waggling and grinning; Nicks unguardedly plays not just air guitar, but air drums; Christine McVie, who gave a dislike of touring as the reason for her 15-year absence from the band, seems untroubled by such concerns, whether playing bluesy electric piano or standing front and centre to deliver her peerless song Everywhere.

The setlist is designed to subtly accommodate Buckingham’s acrimonious departure – it lightly steps around Tusk (1979), an album that was the guitarist’s baby; Big Love is noticeable by its absence from the cavalcade of hits – but both new members are what a football manager would call strong signings. Campbell storms confidently through the Peter Green-era anthem Oh Well. Neil Finn, meanwhile, brings with him not only a voice that sounds pretty much perfect standing in for Buckingham on Second Hand News, but also his own back catalogue. When the rest of the band cede the stage to him and Nicks for an acoustic version of Crowded House’s Don’t Dream It’s Over, it provokes the audience into the latter-day lighters-aloft moment that is waving your mobile phone with its torch activated.

Perhaps they’re just relieved Fleetwood’s solo turn is over. A drum duet with percussionist Taku Hirano, decorated with a lot of extempore grunting and whooping, it goes on long enough to accommodate not merely a visit to the lavatory and a queue for the bar, but a trip back home to check whether you’ve left the gas on, although in fairness, sections of the crowd respond as though a drum solo with extempore grunting is precisely what they’ve ponied up £200 to see. Behind him, the screen fills with images of past Mick Fleetwoods, favouring the world with drum solos over the decades, which gives his interlude as much of a symbolic air as the concluding run at Don’t Stop. If it seems as if it could go on for ever, well, so do Fleetwood Mac themselves.