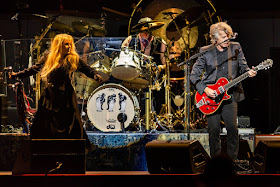 If Lindsey Buckhingham must be replaced, best to do it with the likes of Finn and Mike Campbell. In the legendary band’s latest incarnation, the magic of the music lives on.

Fleetwood Mac are a lore unto themselves. While the Rumours-era line-up holds the romance (mostly broken) for the majority of its fandom, it is the 11th line-up in a total of 19. This is a band who, aside from the rock-solid rhythm section footing of Mick Fleetwood and John McVie, has weathered more life and loss than most. Anyone else, no matter how famous or beloved, has come and gone … some returning, and then going again.

So despite the uproar that followed the 2018 announcement that Lindsey Buckingham had been let go, it was, in the context of history, less of an anomaly and more a case of showbusiness-as-usual. The regard held for new members Neil Finn and Mike Campbell is clear and present all evening on the opening night of the band’s Australian tour – from the sentiments offered from the stage by Fleetwood, vocalist Stevie Nicks and vocalist/pianist Christine McVie, to the time given to showcase the talent of the new breed.

Mick Fleetwood walks out onstage first to a legion of cheers, promptly applauding the crowd before his bass drum brings in The Chain and his bandmates take the stage. It’s spine-tingling from the get-go; Stevie Nicks is reassuringly draped in black with sleeves, long lace, braids and beads on her microphone stand and arms, while John McVie’s classic bass intro to the song’s outro is just well, classic. Notably, Neil Finn on guitar/vocals is immediately a strong presence as is former Heartbreaker Mike Campbell, who owns the lead break.

“Welcome Perth. We’ve done 62 shows in the US and Europe and this is show 63,” Nicks says by way of greeting. The singing icon sounds worryingly hoarse, but her voice warms to the occasion within a few songs.

Christine McVie’s Little Lies raises spirits and hands, and Dreams is suitably dreamy: Nicks’ voice folds warmly into it, her hands exuberantly working a tambourine. A huge chandelier hangs from above, its grandeur complemented by video screens switching from noir-framed mansion staircases to sunny Californian coastlines in washed-out ‘70s colour.

Fleetwood Mac, as such, are augmented by keyboardist Ricky Peterson, guitarist Neale Heywood, percussionist Taku Hirano and backing vocalists Marilyn Martin and Sharon Celani, though everyone is working up a storm onstage. Second Hand News finds Finn on lead vocal, turning slightly sideways to face Nicks as they sing, similar to the time-honoured manner she did with Buckingham.

Say You Love Me Brings the smiles, but when Nicks introduces Black Magic Woman claiming that she initially though it was by another big band (that’s Santana, by the way), she takes band-founder Peter Green’s vocal and sings it “from the eyes of a woman and here she comes now.” The song becomes an extended blues jam, all personnel shining, all giving each other perfect space.

“Okay now for a complete contrast,” says Christine McVie, as the pop feel of Everywhere is followed by the Finn-fronted Spit Enz hit, I Got You. The contrast continues with Rhiannon immediately bringing the crowd to its feet. There’s tingles aplenty as the older voice gives new weight to this dark, Welsh tale and Nicks receives absolute applause for her signature song.

Live set mainstay, World Turning, is led vocally by Finn and McVie but remains Fleetwood’s showcase, from the video montage of the man through the years to his wild, lively call-and-response drum solo, which features master percussionist Hirano. He soon comes to the front of the stage armed with his beloved African talking drum, shouting joy at the crowd before the band closes the song, and Fleetwood delivers some loving band introductions, notably for Campbell and Finn, the latter’s name almost bringing down the roof. McVie is described as “the songbird,” Nicks the “eternal romantic” and lastly, bassist John McVie as being “always on my right-hand-side, no doubt the backbone of Fleetwood Mac.”

Nicks’ eternal romance is showcased in Gypsy and Landslide, though those two songs are split by Campbell fronting a mean and dirty run through Peter’s Green’s Oh Well: all riffage and world-weary with angry young man attitude.

From rock to jewel, Fleetwood gives a heartfelt introduction to Finn’s Don’t Dream It’s Over. The Crowded House staple is delivered with the expected tender gusto from Finn, but as Nicks takes the lead on the final verse it steps into a previously unexpected dimension. “A song like that comes along once on a million years,” she states at song’s end. “It’s magnificent.”

In 1982, Hold Me – from the band’s album Mirage – was quite the hit single, but over the years seems largely forgotten in the haze of decades of multi-platinum success. Tonight it returns, a compelling soft-rocker that allows each member to shine. It’s followed by Christine McVie’s Rumours-era track You Make Loving Fun, about the man she left John McVie for in 1977. One wonders what he makes of it all, playing this irresistibly giddy love song every night on tour.

From Rumours’ most happy moment to perhaps its most ominous, Gold Dust Woman find Nicks in a golden shawl, delivering a trademark dark Hollywood Hills evocation. It’s a bravura performance that inspires a fair few arms-undulating “Stevies” in the audience, too.

Go Your Own Way provides a majestic and rousing end to the main set, with Finn – having completed a winning lead vocal – ending the song on the drum riser, eye-to-eye with Fleetwood, looking for all the world like a kid who cannot believe his luck. 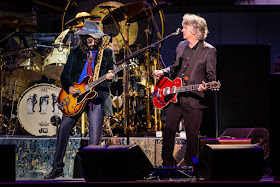 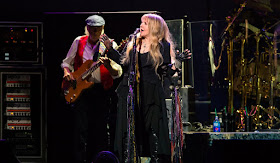 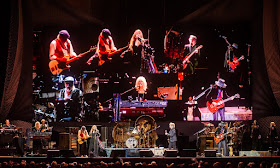