The Fleetwood Mac Sydney show was a testament to their timelessness
By S. B. Williams
Photo Dean Hammer
Tonedeaf 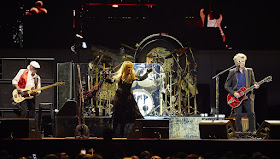 
Last night, Fleetwood Mac descended on Sydney’s Qudos Bank Arena. The band treated fans to a career-spanning setlist that proved that though 50 years into their career, the band are not one to rest on their laurels.

The show was Sydney’s first taste of Fleetwood Mac in their new form. Last year, longtime singer, guitarist and songwriter Lindsey Buckingham was “let go” from the band after they reached a boiling point over touring disagreements. Buckingham was replaced by New Zealand royalty, Neil Finn of Crowded House and Tom Petty & The Heartbreakers guitarist, Mike Campbell.

Whilst it would be futile to deny that the absence of Buckingham was not felt; the new lineup revitalized the band in other ways. The addition of Finn on vocals has ushered in a new era for Fleetwood Mac, one that feels fresh and exciting. The Fleetwood Mac of today is not some hodge-podge operation tenuously thrown together in an attempt to ride the coattails of former glory. Rather, they are a band with a passion that feels tangible, that reinvented themselves out of necessity.


There is nothing mutton-dressed-as-lamb about Fleetwood Mac. Christine McVie and Stevie Nicks ooze the same impossibly cool, bewitching energy that they possessed in 1977. To be in the presence of these two magical women was nothing short of transformative. The pair worked their way through Christine’s romantic proclamations (‘Little Lies’, ‘Everywhere’, ‘You Make Loving Fun’), and Nicks’s haunting musings (‘Dreams’, ‘Rhiannon’, ‘Gold Dust Woman’) with chemistry that felt otherworldly.

Midway through the set, Mick Fleetwood delivered a drum solo that sent the arena into a trance-like state. Commanding the stage with his bellowing confidence and infinite mojo, he barked the orders, “unleash the hounds! unleash the hounds!. It was chaotic and hypnotizing.

Finn fans left satiated after the band delivered not one, but two cuts from his back-catalogue. The first came in the form of Split Enz track ‘I Got You’. A performance that Finn prefaced, revealing that when the track broke international waters, Stevie Nicks would watch it on MTV and weave her own harmonies.

The band’s cover of Crowded House anthem ‘Don’t Dream It’s Over’ incited the most passionate sing-a-longs of the evening. To hear Nicks and Finn perform a track that is so deeply ingrained in the DNA of Australia was monumental.

Mac took a moment to honour the legacy of the great Tom Petty. Performing a heart-rending cover of his perennial song ‘Free Falling’, the track was backed with a slideshow of the late musician through the decades.

The concert was a welcoming haven for all walks of life. Teenagers who had ruthlessly pre-gamed with Passion Pop and old men in their Zimmer frames all united in song and dance to the beckoning call of ‘Go Your Own Way’.
Nickslive at Sunday, August 18, 2019
Share