Fleetwood Mac review: Neil's in, and it's not a too-crowded house
By Michael Bailey
SMH.COM 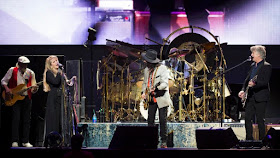 
It was apt that Frankenstein's monster was on the big screens as Neil Finn played I Got You on this night with, blimey, Fleetwood Mac.

For this unlikely melding of Kiwi artiness and California slickness was thanks to the 'Mac going back to the lab. Sixties bluesers who owned the late 1970s after sewing on folk duo Buckingham Nicks, last year they shafted Lindsey Buckingham and grafted on one of Tom Petty's Heartbreakers, Mike Campbell, plus the singer-songwriter from Split Enz and Crowded House.

The experiment ended better on this night than Dr. Frankenstein's did, although as in Mary Shelley's novel, the motivations weren't perfectly clear.

Drummer Mick Fleetwood, bassist John McVie, and frontwomen Christine McVie and Stevie Nicks certainly seemed pleased with their antipodean addition, and not just because Finn's presence meant they could book four nights at this arena instead of the three they could justify when they last visited in 2015.


Finn made his mark right from stomping opener The Chain, with singing as tough and more charismatic than that guy who sang it originally. (Buckingham's four decades of service went unmentioned from the stage on this night – although, was that a wry smile on Finn's face as he sang his predecessor's words on Second Hand News, "Someone has taken my place"?)

The Kiwi's harmonies and rhythm guitar also sounded in the pocket, to the extent you could pick out what anyone was doing on a stage that, with added sessions musicians, housed two keyboardists, three guitarists, a drummer and a percussionist, and two non-band backup singers.

Respectively at least two and 10 years younger than any of the Mac stalwarts, Campbell and Finn still stood out.

The Heartbreaker didn't waste a note on his solos, and shone on the material from the 'Mac's blues incarnation, including a blistering Oh Well, a smouldering Black Magic Woman (a sultry gender-reversed Nicks lead stole it back from Santana) and an aching Man of the World, given the gravitas it needs by Finn's scuffed tenor.

Having Finn by her side seemed to lift Nicks, who even smiled when he pointed at her and sang the "shacking up is all you want to do" line from her ex-husband Buckingham's Go Your Own Way.

Yes, she sometimes sung flat – but the soul Nicks put into Rhiannon and Gypsy were undeniable, the whirling dervish dancing and vocal ad-libs of Gold Dust Woman charmed, and Landslide (backed only by Finn fingerpicking) showed she could still hold the big notes, and our hearts.

That one would have been the highlight were it not for the home ground advantage of Don't Dream It's Over, which overcame a chintzy bongo backing thanks to impassioned performances from Finn on the first verse and Nicks, bringing the house down, on the second.

"I've got to remind him every night, that's a life's work in that song," she said afterward. Awww.

Christine McVie's vocals didn't always rouse such emotion, with second song Little Lies particularly wobbly, although she'd warmed up by the time she delivered a verse of her own Don't Stop at the finale.

But Mick Fleetwood was in fine form, his howling and shrieking during a 10-minute drum solo on World Turning injecting a welcome bit of madcap into the otherwise well-mannered proceedings.

And therein lies the lingering doubt about 'Fleetwood Finn'. The 'Mac has long been a corporatised beast, and for all his smiles on stage, one wonders how long a solo star whose recent albums show him bursting with ideas will be content to play pre-ordained bit parts in other people's songs.

New music would seem key to Finn staying on, and this performance showed a band with most of the chops required to do it justice. 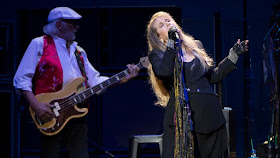