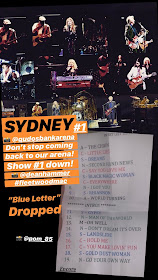 The Chain has been a Fleetwood Mac concert opener seemingly forever, an ode to the musical bond which has bound these legendary artists together against the odds.

That bond has been stretched and tested and snapped over the decades thanks to their well-documented divisions and most recently last year when Lindsey Buckingham not-so-amicably parted company with Mick Fleetwood, Stevie Nicks, John and Christine McVie.

Perhaps now The Chain better represents the connection between the band and their millions of fans around the world as they continue their farewell victory lap of the globe.

The signature song also served to satisfy the curiosity of fans new, old and somewhere in between, about how Neil Finn and Tom Petty’s longtime sideman Mike Campbell fit into this iteration of the legendary rock band.

A natural interplay both vocally and as performers between Finn and Nicks was further underscored when they were matched in Second Hand News.

There’s definitely no doubt he is loving this gig.

Christine McVie, who returned to the band in 2013 after a 16 year hiatus, may not possess as much lead vocal strength as in decades past but her harmonic presence and keyboard virtuosity are essential to this farewell tour.


Campbell, who goes way back with Nicks via Petty, reprises all your favourite Buckingham guitar licks with his renowned skill. But without some of the over-the-top theatrics and guitar tossing which his predecessor often indulged.

The Mac’s ranks are boosted by a collection of other musicians and backing vocalists to make it all sound big and the multi-layered songs realised as we remember them.

But we parochial kind in Australia of course were occasionally compelled to focus on Fleetwood Finn’s contribution to this timeless musical legacy.

The core band members have been very generous of spirit in making him feel welcome.

Split Enz’s indomitable I Got You is in the setlist with Finn explaining Nicks had loved the song so much when it exploded in the MTV era and would harmonise along with it. That performance also got pockets of the Qudos Bank Arena crowd up on their feet.

Later they performed Crowded House’s Don’t Dream It’s Over, a song Mick Fleetwood fell in love with on a first hearing when it commanded the world’s airwaves through the mid ‘80s.

It provoked one of the loudest singalongs, as it always does, of the evening’s hit-filled feast.

It remains a song of instant and delightful and moving unification, made even more beautiful by the sea of phone lights glowing in the Arena.

At the Live Nation Green Room event before the show, Fleetwood compared that song to the great works of John Lennon and Peter Gabriel.

“I’ve always, right from the beginning, loved his songwriting and especially the one song that drove me over the edge was Don’t Dream It’s Over,” Fleetwood said.

Campbell’s contribution to the contemporary songbook also served as a tribute to Petty when they performed Free Fallin’ in the encore.

Fleetwood was given his moment to maniacally shine during World Turning, a traditional extended solo and call and response audience interaction.

“Release the hounds,” he commanded, encouraging the crowd to get louder.

For all of the setlist and moment-to-shine inclusivity, the farewell Fleetwood Mac roll call delivers most of the hits the dedicated fan is desperate to hear.

And let’s face it folks; they are the Stevie songs. Dreams, Rhiannon, Gold Dust Woman, Gypsy and Landslide, which she dedicated to her Sydney “family”. Nicks and Margaret Michael and her daughters became close to the revered singer when she visited her doll shop in The Rocks 15 years ago.

The original witchy woman of rock is so beloved here both with the Mac and as a solo artist.

My own disappointment was Sara, which has made regular appearances at Sydney concerts in the past couple of decades, was missing. That song turns me into a puddle every single time.

I can guarantee every Mac fan has one of those songs they would have begged to have them perform on this swansong tour.

Perhaps catering to the obvious shifts in both the strength and composition of their vocal harmonies, there were subtle tweaks in arrangements, none of which diminished nor detracted from the songs we love best.

Buckingham wasn’t the only ghost in the room.

When the ladies were away off stage having a break, the boys they did play.

“The lads having at it,” Fleetwood declared after the performance of the 60s Green song Oh Well. 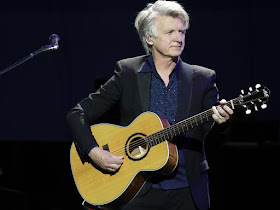 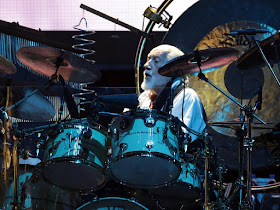 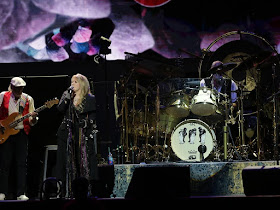