Who would have thought that we'd still be seeing Fleetwood Mac in 2019? 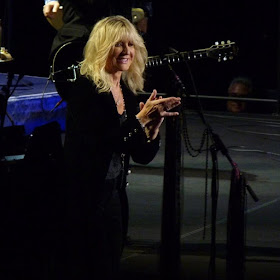 If their songs weren't so strong, endurance may be Fleetwood Mac's greatest legacy

Thirty minutes into Fleetwood Mac's set at the Brisbane Entertainment Centre this week, Stevie Nicks admitted that she didn’t realise 'Black Magic Woman' was a Fleetwood Mac song until well after she’d joined the band.

It's an astounding admission. Sure, the song had been popularised by Santana's 1970 cover, but to not know the extent of your new band's catalogue – especially the hits – before joining is almost unthinkable.

But this says more about the strange and complex entity that is Fleetwood Mac than it does Nicks' own knowledge gaps. This is a band whose history is confusing, whose music is wildly diverse, and who continue to keep us guessing. 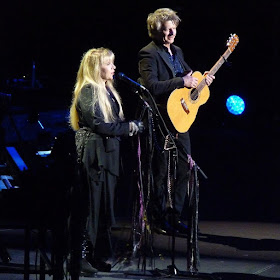 You don't get a timeline like this without a strange history.

That's why the prospect of seeing this wildly new incarnation of one of the history's most celebrated rock bands doesn't seem completely unfaithful. Consistency is not Fleetwood Mac's strong-point. When their line-up has remained staid, their very existence has been precarious, reportedly fraught with infighting and ill-feelings.

If nothing else, you have to respect the band's endurance. That they are still touring in any form feels almost miraculous.

But are they any good?

Having not witnessed Fleetwood Mac in the 1970s or 80s, I can't faithfully suggest that they were perhaps once a better live prospect. But given the way that songs like 'Say That You Love Me' and 'Rhiannon' lose steam soon after their iconic intros, you'd want to hope so.

It's not that they are bad, it's just that Nicks and Christine McVie don't have the vocal ranges of their younger selves. At 76 and 71 respectively, can we really expect them to?

The mix sounds thin and disjointed, miles away from the taut and compressed radio-ready production on their classic records. The atrocious acoustics of the embarrassing, cavernous venue in which they play offer no assistance in this regard either.

One aspect of this band that remains amazing is their musicianship. Mick Fleetwood's drumming is thunderous, Christine McVie's flawless keyboard work remains the unsung hero of the band, and it seems clear the whole operation would fall over without John McVie's quiet contribution on bass.

Finn is predictably solid in taking Lindsey Buckingham's spot out the front of the band, while Campbell's effortless (and tasteful) shredding is enough to make you wish the Heartbreakers made one more trip to Australia before Tom Petty's passing. It's nice to see him with such a prominent gig though, and he more than makes the most of it.

Many of the songs shine; Stevie Nicks saves her best performance for 'Gold Dust Woman' towards the set's end, reminding us that it remains a special cut of psychedelic pop. The all-in sing-alongs of 'Go Your Own Way', 'The Chain' and 'Dreams' stand up as titanic forces of popular music. It feels significant to be in their very presence.

Fleetwood Mac remain a capable band, but to say that they are at the top of their game would be a bald-faced lie.

Legacy is a strange thing in music. Some bands go to extreme lengths to ensure theirs remains intact, knocking back lucrative opportunities so not to sully the good name and reputation of their group.

But what if your band’s legacy has always been a little bit crooked? What if the band was already something of a mess before its most popular line-up coalesced?

For some, Fleetwood Mac's finest legacy ends with founding member Peter Green, whose bluesy vision on their first album is a million miles from the pop heights the band would soon hit.

For others, the thought of Fleetwood Mac without Lindsey Buckingham is unconscionable.

There is no perfect distillation of Fleetwood Mac. No epitome. They are an ever-changing beast whose endurance would be their greatest legacy if they didn't have so many amazing songs.

With most members now well into their 70s, you wonder whether they're doing the right thing by continuing to milk this band when their best performing years are behind them.

But I saw the faces of the eager fans who’ve gleefully let this band soundtrack their lives. I watched them dance, I heard them unabashedly scream along to those big hits.

They didn’t care about the past or the future of Fleetwood Mac, they were just thankful to see these songs come to life in front of them.

Maybe, after all these years, we need to acknowledge that Fleetwood Mac is more about its fans than its members.

No amount of over analysing will change the fact that this is a band that still matters to so many. If they can continue to spread their joy, who are we to question it?