STILL GOING THEIR OWN WAY
Andrew McMillen
The Australian 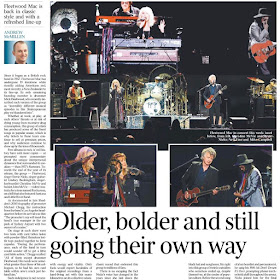 Since it began as a British rock band in 1967, Fleetwood Mac has undergone 19 iterations while steadily adding Americans and, most recently, a New Zealander to its line-up. Its only remaining founding member is drummer Mick Fleetwood, who recently described each version of the group as “incredibly different musical episodes in this Shakespearean play we blundered into”.

Whether at work, at play, at each others’ throats or at risk of dying young from excessive drug consumption, this group of artists has produced some of the finest songs in popular music, which is why tickets to these tours continue to sell at premium prices, and why audiences continue to show up by the tens of thousands.

Few albums in rock ’n’ roll history have sold more copies — or prompted more commentary about the unique interpersonal dynamics that surrounded its creation — than 1977’s Rumours. Towards the end of the year of its release, the group — Fleetwood, singer Stevie Nicks, singer-guitarist Lindsey Buckingham, singerkeyboardist Christine McVie and bassist John McVie — visited Australia for a tour named Rockarena, on a bill that also featured Santana and Little River Band.


As documented in Iain Shedden’s 2010 biography of promoter Michael Chugg, the instruction from the band’s Los Angeles headquarters before its arrival was this: “The promoter’s rep will meet the band’s tour manager in the car park of Sydney Airport with two ounces of cocaine.”

On stage at each show were two tents with card tables laden with powder-filled Heineken bottle tops pushed together to form capsules. “During the performance, each of the band in turn would wander off to get a little card table action,” Chugg recalled. “All of them except drummer Fleetwood. His needs were somewhat greater than those of his colleagues, so he had his own card table within arm’s reach just behind him.”

Such indulgence is not necessarily conducive to longevity. Thankfully, all five of the musicians who appeared on that tour 42 years ago are still with us, though Buckingham no longer is with the band. His sacking was announced in April last year, prompting acrimony — with this band, was there any other way? — followed by lawyerly interventions and an eventual settlement.

Taking his place as lead vocalist for the band’s current Australian tour is Neil Finn, while the bulk of Buckingham’s lead guitar work is handled by Mike Campbell. Both are familiar and comfortable with playing arenas, with their acts Split Enz and Crowded House, and Tom Petty and the Heartbreakers, respectively.

Personnel changes aside, the chief challenge of writing hit songs in your 20s and 30s is figuring out how to carry those arrangements into your 60s and 70s with energy and vitality. Only fools would expect facsimiles of the original recordings from a hard-living act with this many kilometres on its collective odometer, yet to its credit Fleetwood Mac shoulders that weight of history without much of a struggle.

Whether through technical issues or some other unseen force, though, the opening salvo at the first of three shows at the Brisbane Entertainment Centre on Tuesday night failed to connect.

The Chain, Little Lies and Dreams instead came across as sluggish and wayward.

From that underwhelming point, however, the six main players — backed by another keyboardist, guitarist, percussionist and two back-up singers — gathered a momentum that continued for more than two hours. The first truly beautiful moment was Christine McVie’s Everywhere, whose stacked vocal harmonies in the chorus perfectly exemplified the classic sound that endeared this group to millions of fans.

There is no escaping the fact Nicks’s voice has changed in the years since she laid down the evocative chorus to Rhiannon, but what she lacks in a higher register is covered by the extraordinary tones she still coaxes from the middle and lower end of her range. Towards the end of the 21-song set list she performed Gold Dust

Woman with a sincerity that was mesmerising.

The abundance of musicians on stage meant that some of the band’s most layered songs were overwhelmed by a busy mix. This was most apparent on Go Your

Own Way, which was dominated by acoustic guitar and percussion, burying John McVie’s bass. It was only halfway through that Campbell’s lead parts were pushed to the fore, allowing the song — and the set — to end on a high, with he and Finn locking into an extended jam before the drummer brought it to a thumping close.

With his rock-dog persona Campbell, wearing his uniform of black hat and sunglasses, fits right into this group of weirdo outsiders who somehow ended up, despite themselves, at the centre of popular culture. Before the second song finished, he had played three guitars; by set’s end, that number had reached double figures. His playing covered Buckingham’s exhaustingly diverse range of techniques, styles and parts, while his fellow newcomer was allowed to take a few leads, too.

Finn’s addition to the group has been of particular interest to this part of the world, with the sheer curiosity of the Crowded House frontman being sucked into the machinations of this rock institution perhaps providing reason enough to convince a few fence-sitters to open their wallets to see how he performs on this tour. The Kiwi rose to the occasion with aplomb, alternating between the spotlight and stepping back as needed. As well, he was at the centre of two towering mid-set highlights.

With an acoustic guitar in hand and backed by the gentle playing of a keyboardist and percussionist, he sang his 1986 hit Don’t Dream

It’s Over, prompting phone torches held aloft throughout the arena. Nicks joined him for the final verse and chorus, then told him a song like that came along only once in a lifetime. “So good one, Neil,” she said. “Now I’ve got to try to follow that.”

She then bested him, as only Nicks could do, with the cutting beauty of 1975’s Landslide, featuring Finn beside her on acoustic guitar. Her timeless song about the passage of time takes on more meaning and pathos with each passing year. When one of the most remarkable voices in music history sang those lines — “But time makes you bolder, even children get older / And I’m getting older too” — at 71 years, the result was a poetic resonance that surely would have made Shakespeare shed a tear, too.