Fleetwood Mac still love what they do, and it shows. - Review 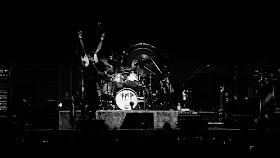 Formed amidst the British blues boom of the late 1960’s, with a rhythm section whose surnames had the rare distinction of combining to create the band’s title, Fleetwood Mac have come a hell of a long way.

Casualties, internal relationships, big success, breakups, addictions, enduring friendships, long-term musical magic and memories are all part of their story. And with another significant line-up change occurring in 2018, two questions came to mind at last night’s opening show minus key playmaker Lyndsey Buckingham; how are they travelling without him, and how would one of his two replacements, local hero Neil Finn, fair in such a pivotal role?

The first of four nights at the city’s premier indoor stadium Spark Arena, last night’s show also held special significance, as it was the first glimpse of the band with Neil Finn on his home soil. Along with Finn, ex Tom Petty Heartbreaker, guitar gun-slinger Mike Campbell have collectively replaced Buckingham, who was ousted last year due to internal conflicts. This is the second time in the history of the band that they have replaced Buckingham with two musicians. Some big boots to fill then?

So, it was with heightened anticipation, that the ominously tall founding member Mick Fleetwood led the band out onto the stage, activating joyous applause for both the beloved group itself, as well as the arrival of the boyish Finn. Fittingly they opened with ‘The Chain’ off their mega album Rumours, a song affiliated with the bands tenacity to stick together through the trials of adversity. The dual vocals required for the tune, coupled with its extended guitar solo coda, meant that both Finn and Campbell were featured straight away on lead vocals and guitar respectively. And they didn’t disappoint, both adding experience, class, style and character to the Mac sound. Underpinning all was the bassline of foundation member, the super solid John McVie.

The Mac’s female star combination of Christine McVie and Stevie Nicks both got early entries for two of their signature tunes; ‘Little Lies’ and ‘Dreams.’ Here the audience were presented with a taste of what had been observed in previous shows, that this configuration of Fleetwood Mac has consented to perform in a notably more laid-back mode than previously heard. The slight tempo pull-backs of many of the songs the best indicator of this. 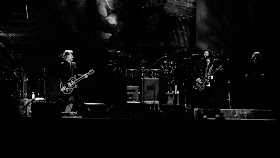 Syncing with Maori language week, Neil Finn addressed the audience with “Kia Ora NZ!” before turning in a rather decent version of ‘Second Hand News.’ Again, in cruise control, McVie had the audience incrementally on their feet for ‘Say You Love Me.’ As expected last night’s set featured more than a few tracks – seven in total – lifted from Rumours, the record that propelled Fleetwood Mac into superstardom status in 1977. In its day, Rumours became the biggest-selling album of all-time, its west-coast rock appeal producing so many hits that the band unequivocally ruled the airwaves.

Made famous by Santana, Nicks reminisced that she didn’t know that ‘Black Magic Woman’ was composed by her band, until recently. Written by genius and co-founder guitarist Peter Green, who helmed the band in its early blues incarnation it was the first of three songs last night from his pen, Nicks providing lead vocals for this one, while Campbell had some fun bending notes and jamming a lengthened shuffle outro. Although closely following the arrangement of Green’s original version, the feel delivered here was coasty; recurrent of Canned Heat’s ‘On the Road Again.’

Changing pace, McVie popped out from behind her keyboard to the front of stage for her hit ‘Everywhere’ and shook some maracas; Finn soon cranking up his gold Gibson Les Paul for the first hit he ever had, the Split Enz kiwi classic ‘I Got You.’ Just as much as the partisan crowd enjoyed this selection, so did Mick Fleetwood, who exchanged smiles with Finn throughout, drumming enthusiastically like a youth getting a taste of playing live for the very first time.

Nicks’ breakthrough hit ‘Rhiannon’ off the 1975 self-titled album Fleetwood Mac got a breezy treatment; Finn ushering in a lesser known track off the same record entitled ‘World Turning’. Images of the band in years gone by were projected onto the big screen, as they spun around a globe. The song deconstructed into a slightly bizarre drum solo in which Fleetwood called out to the audience while playing, finding the right time and space to “unleash the hounds.” Segueing into a fabulous duet with percussionist Taku Hirano, Fleetwood proceeded to get out front with a tuneable hand drum for more exchanges with Hirano, before ushering the band back onstage to recommence the song. All the while a stagehand fed Fleetwood drinks directly to his mouth, although one would assume that it is most likely water nowadays.

“We can’t do this in our front living rooms” Fleetwood would remark later, in reference to one of the more extensive Fleetwood Mac touring line-ups seen. An eleven-strong ensemble, the frontline sextet was joined by an additional five touring members; keyboardist Ricky Peterson, long-time friend of the band, guitarist Neale Heywood, the aforementioned highly-skilled percussionist Taku Hirano, and backing vocalists Marilyn Martin (who covered Nicks’ ‘Sorcerer’ many moons ago) and Sharon Celani.

Although Mick Fleetwood has assumed the mantle of band spokesperson, Nicks is very much the groups lead vocalist; delivering a groovy rendering of ‘Gypsy’, another of her numerous hits, the mood of the moment led neatly into Finn imparting some more insight into Green, while paying homage to him with a touching version of his ballad ‘Man of The World.’ For Green fans, there would have been more than a few concealed tears in the house, as the departure of Buckingham meant that the opportunity to play songs from Green’s era had once again became available, Buckingham historically all but refusing to go there.

Soon it was Mike Campbells turn to step up and take on another Green classic; ‘Oh Well’, seeing him handling both vocals as well as some searing guitar. Campbell mentioned leading into the song, that he was wearing a coat that he’d purchased in Auckland when he was last here in 86’, as part of a double-billing with Tom Petty and Bob Dylan. Campbell jesting that it hadn’t come out of the closet until now.

Mick Fleetwood once again took the mic to give a heart-warming intro to Finn’s ‘Don’t Dream It’s Over’, rendered here in a delicate, acoustic form. At its conclusion, Nicks reiterated that songs that good only come along once in a lifetime before joining Finn for the duet ‘Landslide.’ ‘Hold Me’ exemplified the bpm reduction benefits, by this stage the band creating a groove worthy of a supergroup in harmony.

Enter one of the most no-nonsense drum intros ever for ‘You Make Loving Fun’; McVie playing one of her funkiest songs just as good as she always has. Her band-sister Nicks then giving a rousing version of ‘Gold Dust Woman’, covering her black dress with a gold sparkly shawl while getting lost in her own spiritual dance.

Closing the set was the thumping ‘Go Your Own Way.’ It was an epic version, made more so by Campbell, who took his moment to really fly. His mastery of the guitar giving the sense that rock n roll is still very much alive and kicking. It was the perfect way for the band to finish, but gratefully they of course returned for a two-song encore.

Nicks took on Petty’s ‘Free Fallin’, as images of one of rock’s favourite late sons were projected behind the band, many of them with Nicks herself, such was their endearing relationship. An up-tempo rendition of ‘Don’t Stop’ concluded the evening, Mick Fleetwood reminding one and all to “always remember to be kind to one another.”

Fleetwood Mac still love what they do, and it shows.