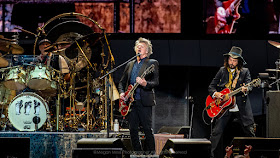 Neil Finn playing with the mighty Fleetwood Mac. Not only playing with, but touring with and officially part of the band. What kind of quirky, strange, yet fascinating parallel universe could this happen in? Well, oddly enough – this one! And the long awaited tour last night finally hit Auckland; ahead of three more Auckland shows on September 14th, 16th and 19th before heading to Dunedin on September 21st.

Auckland’s Spark Arena was packed to the rafters, with everyone high on anticipation for what to expect. Would everyone’s favourite songs be played? Would we get a stonking Mick Fleetwood drum solo? Would the Kiwi flavour of Neil fit like a well-used glove in the Fleetwood machine? Well, it was time to find out…

The show starts off with ‘The Chain’, as the suave and sophisticated Mick Fleetwood takes his place behind the drums and is soon joined by Miss Stevie Nicks. We then see Neil Finn heading out, who got a massive reception. With his guitar on fire, it seems Neil is reveling in this latest role and is enjoying being part of this huge setup.

We jump into ‘Dreams’, and there seems to be an understood camaraderie between the thousands of Fleetwood fans in attendance. Stevie has put a spell on the Spark Arena, full of class and style as she mesmerises us in her long flowing black dress.

Up comes the patented Mick Fleetwood drum solo, and this one does not disappoint. 10 minutes off extreme talent is on display and he’s helped out on percussion by the wonderful Taku Hirano.

And the hits? We get them all! ‘ I Got You’, ‘Landslide’, ‘Free Falling’, ‘Don’t Stop’, ‘Gypsy’ and of course ‘Go Your Own Way’. But the highlight had to be Neil Finn who Fleetwood Mac embraced for him to add some of his own recipes to the show. We got the Split Enz classic ‘I Got You’ and the iconic Crowded House hit ‘Better Be Home Soon’. Mick explained to the crowd on hand that when he first heard this song he had no idea who sang it, but a song like that only comes around once in a life time. Well said Mick.

Finishing off with Tom Petty’s ‘Free Fallin’ and the classic ‘Don’t Stop’, no one left disappointed, and the crowd were itching for more.

So the first of the Fleetwood NZ shows for this tour ticked all the right boxes. If you’re lucky enough to see them at Spark Arena on the 14th, 16th and 19th, or at Dunedin’s Forsyth Barr Stadium on September 21st, all I can say is you’re in for a treat, and a show that you’ll be thinking about for years to come. 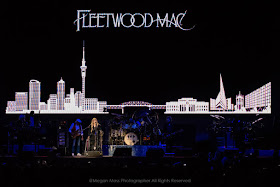 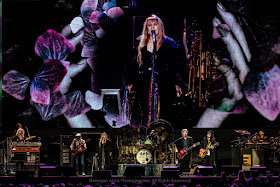 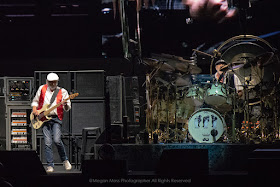