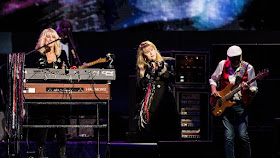 Given the well-documented dramas they’ve endured over the decades, you assumed by now Fleetwood Mac were pretty much invincible.

However reuniting that classic Rumours-era line-up back for the 2014/2015 tour proved they had one more soap opera-style twist up their billowing sleeves.

So in 2019, it’s either this Lindsey Buckingham-free version of Fleetwood Mac or nothing.

But the chain’s been broken and repaired so many times over the years change is the only constant in the band’s line-up.


Together they’ve given those familiar songs a new spin and changed the energy on stage.

Finn does their songs, then they do Split Enz’s I Got You — which he reveals he wrote and recorded in Melbourne, where he also got his “first perm” which Stevie Nicks turns into a full duet.

She then sings the third verse of Crowded House’s Don’t Dream it’s Over (also written in Melbourne) a song you didn’t think could be improved — Nicks tells Finn it’s a “once in a lifetime song”.

They’ve dived deeper into Mac history this time — the 50 year old Man of the World and underrated Christine McVie penned 1982 hit Hold Me joining regulars The Chain, You Make Loving Fun, Go Your Own Way, Everywhere Little Lies, Say You Love Me and Don’t Stop (but sadly no Sara or Songbird).

It’s a Stevie Nicks-heavy night and there’s nothing wrong with that at all when the living legend steers Dreams, Rhiannon, Gypsy, Gold Dust Woman and a particularly magical Landslide.

And considering their unpredictable history, you wouldn’t put it past them to patch it up with Buckingham for one final farewell tour in a few years’ time.