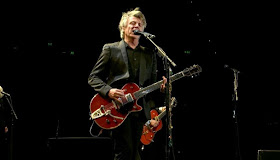 After witnessing the majesty of Fleetwood Mac in Auckland on Thursday night, I'm still reeling, electrified, and a little confused. Of two things, though, I am sure:

1. Mick Fleetwood is not of this mortal plane

2. Neil Finn really is in the band

Storming onto the Spark Arena stage with his guitar held triumphantly aloft, Finn is bursting with pride and energy. The iconic band comes to us off the back of no less than 76 shows, but this one is his.

As the spine-tingling refrains of 'The Chain' ring out across the arena, I ask myself: 'Is Neil Finn sexy now?' The look of admiration he frequently receives from Stevie Nicks points to yes.

One flawlessly executed guitar solo later, there's no doubt that Tom Petty guitarist Mike Campbell, another recent addition to the lineup, can keep up and then some.

We leap into a jaunt through the band's catalogue of lighter, soft-rock hits, learning that the only thing more infectiously joyful than the intro to 'Everything' is the look of perpetual glee plastered on Mick Fleetwood's face.

Every bit the mythical enchantress we dreamed she would be, Stevie draws us under her spell with her inimitable presence, collection of sparkly shawls and, of course, those pipes.

From the way she purrs 'Black Magic Woman', to her crisp, soaring, exactly-as-it-sounds-on-the record delivery of 'Rihannon', she truly is the stuff of legend.

The indisputable highlight of the evening comes at the halfway mark, when Mick demonstrates, without a shadow of a doubt, that he is consummately crackers. 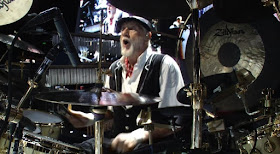 Pounding away on his kit in a feverish rhythmic trance, Mick chants indiscriminately into his head-mounted microphone like a cult leader or someone channelling an extraterrestrial.

Certainly, what followed was quite other-worldly.

"Are you ready to release the hounds?" he asks us. "I can hear them coming!"

We don't know exactly what or who 'the hounds' are, and we can only understand about every third word Mick is saying, but we find ourselves howling back at him regardless.

As his solo thumps its way to a thunderous crescendo, Mick turns to his "secret weapon", percussionist Taku Hirano, who assists him in bringing the house down in a hail of unbridled mad brilliance.

The rest of the band returns to the stage to continue 'World Turning', and I can see the rest of the crowd blinking and shaking their heads in astonishment, just like I am.

We're reminded we've in fact been watching a musical interlude, rather than having slipped into a strange, exhilarating cheese-induced dream.

For a nation that's stoked to be included on a world map or mentioned in a Hollywood movie, it's especially thrilling to see the influence Finn's introduction has had on the setlist.

We're treated to a cover of Split Enz' 'I Got You' - a surreal and wonderful opportunity to watch Stevie's effortlessly cool take on a song often sung by drunk aunties at 21sts.

By the time she joins forces with Neil once more for 'Don't Dream It's Over', the crowd is beside themselves. In the preamble, Mick tells us the song has had a significant impact on his heart and life - trust us, Mick, we get it.

Stevie even dedicates 'Landslide' to Lorde, one of her "favourite little people out here in New Zealand".

It's all a bit bloody choice, aye.

When dealing with a band with such an extensive and beloved discography - it's nigh on impossible to please everyone with the perfect setlist.

I'm not sure if it's purely due to years of being forced to sing it at primary school, but rounding out the evening on 'Don't Stop' provided my only gripe of the evening.

It's a jolly good sing-a-long, but it lacks the searing guitar licks and multi-part harmonies you hope to have ringing in your ears as you leave a Fleetwood Mac show.

Thankfully, Mick's back on the mic to send us off post-encore. "This is a strange, strange world we live in," he tells us. Surely though, there's no world more strange and fascinating than the one in Mick's head.

"We must be so terribly kind to one another!" he exclaims. And with that, he pops out the lid of his red top hat and slides off into the darkness.

Fleetwood Mac will play three more shows at Spark Arena, on September 14, 16 and 19, before heading to Dunedin for one night only on September 21.
Nickslive at Friday, September 13, 2019
Share