When it's Fleetwood Mac, every song is an encore
STEPHEN HUNT - CALGARY HERALD
PHOTO: Replicant Tusk 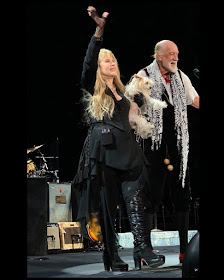 Fleetwood Mac — a walking, talking, drumming and humming Rock and Roll of Fame — returned to Calgary Sunday, to perform a makeup concert for Calgary that Stevie Nicks said was cancelled three times.

All of which, she added, were completely her fault.

“But don’t worry,” Nicks added, in that instantly familiar husky voice that seemed to spin the clock inside the jam-packed Saddledome back to 1977, the year Rumours was released, and changed music history.

“We will always return,” Nicks said, “to the land of snow-covered mountains.”

Then Nicks, and Neil Finn — taking over the role of Lindsey Buckingham in the 2019 edition of Fleetwood Mac — broke into Landslide, one of the great ballads (Nicks wrote it when she was 23 and it still sounds spectacular), and 18,000 people in the Saddledome sang along and many, many gigabytes of digital camera memory were chewed up by people videotaping the song on their phones.

That is, if they had any digital memory left, because to attend a Fleetwood Mac concert is to sit in awe of their songbook and your first temptation is to try to get some visual proof that you were actually there.

It’s astonishing — a concert where every tune is an encore.


Opening with a quintet of Mac classics (The Chain, Little Lies, Dreams, Second Hand News and Say You Love Me), the band put to rest any notions that without Buckingham, they aren’t really Fleetwood Mac anymore.

Finn, who formerly fronted Split Enz and Crowded House, played hits from both those bands — I Got You and Don’t Dream It’s Over — in strong duets with Nicks, and it felt a little like found money when half the crowd flipped on their phone flashlights and sang along to Don’t Dream It’s Over.

But truth be told, the absence of Buckingham was filled with Finn, and guitarist Mike Campbell, a Heartbreaker and longtime sidekick to the late, great Tom Petty, who took over Buckingham’s guitar solos while Finn took over his vocals.

It was an adjustment, and it’s a different Fleetwood Mac than it used to be. In a way, subtracting Buckingham has sent the band back in time, to the early 1970’s, back to their bluesy origins.

The design of the show seemed rooted in the earliest days of the band, the late ‘60’s and early ‘70’s (Rumors was actually the 11th Fleetwood Mac album!) with lots of projected images that seemed pulled from a dusty chest of some edgy filmmaker from 1969.

That came through in the set list, where they played a long, bluesy version of Black Magic Woman (a hit for Santana, originally written for Fleetwood Mac by Peter Green), and an even more drawn-out, jam session version of World Turning, that featured a 15 minute drum solo by Mick Fleetwood, who seems to have no age.

He’s a true wonder, and a joy to behold, and it’s Fleetwood’s positive vibrations that seem to be in constant spirited debate with the more moody, melancholy musings of Nicks and Christine McVie, who still sounds fantastic.

“We are witnessing living legends up here onstage,” said Campbell. “Mick and (bass player and co-founder of the band) John McVie are the longest lasting rhythm section in rock and roll history.

“They hate it when I say living legends,” he added, “but it’s true.”

It’s also worth noting that Fleetwood Mac has always embraced the feminine. It’s no small deal that two of its three main songwriters, McVie and Nicks, were women, back in the day when rock was almost exclusively a boy’s club — and that embrace of the feminine still resonates.

All through the Saddledome Sunday night, women stood and danced and celebrated the songwriting of McVie and Nicks, and it was pretty clear that the breakups they wrote about in Rumors weren’t just their own: they were and still are, universal pop rock anthems that pulled 10 million women through difficult emotional moments by making them feel a little less alone.

Maybe a few guys, too.

All of which made Sunday feel a little more meaningful than just another OK, Boomer greatest hits show!

What was missing? All of Tusk, which was a showcase of the musical genius of Lindsey Buckingham, and that felt like a loss, but what can you say? Lindsey got himself fired from the band.

In the encore, Nicks sang Free Falling as a tribute to the late Petty, projecting images of herself and Campbell and Petty over the years, and it felt as if we were all special guests at the epicenter of the last 40 years of rock and roll.

I guess we were.

Then they closed with Don’t Stop, where Finn sang Buckingham’s lead vocals, and it felt a little bit weird. Maybe not bad weird, but different, like maybe when your cool step dad cuts the turkey at Thanksgiving.

Sunday, it was really fun to listen to them too.

Before they departed, Fleetwood took a moment on stage to say thanks and to say goodnight and Nicks brought her pooch Lily out onstage.

“Be kind,” Fleetwood said. “And remember: the Mac will always be back!”
Nickslive at Tuesday, November 12, 2019
Share