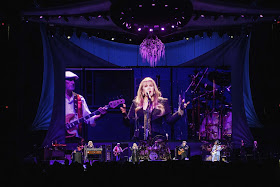 
It’s been five years almost to the day since Fleetwood Mac last graced the Bell MTS Place stage. It wasn’t supposed to be quite that long, of course, but an ill Stevie Nicks meant the band’s previously scheduled April 11 Winnipeg tour stop had to be rescheduled — one of a handful of cancellations and postponements this year due to health issues of older performers.

But, that’s the risk one takes when touring with a band that has an average age of 70.

Fleetwood Mac only took a few weeks off in the spring for vocalist Nicks to recuperate, however, and have managed to hammer out the rest of their summer and fall dates, with the rescheduled Winnipeg show being the fourth-last stop on their list before wrapping this tour up later in November.

And apparently just a few weeks off were all they needed — Nicks, Mick Fleetwood, John McVie, Christine McVie and Lindsey Buckingham replacements Mike Campbell and Neil Finn, in true rock ’n’ roll style, started late and started loud, quickly amping up the crowd with the iconic thumps of The Chain, the first of many tracks off the band’s landmark 1977 album, Rumours.

"Thank you for coming back," Nicks said. "Let’s get this party started."

The hits continued to roll hard and fast; the Christine-led Little Lies, Second Hand News with Finn on lead vocals and Black Magic Woman all made their way into the top of the set. And, of course, the stunning Dreams, a song that never seems to lose it’s charm for listeners or, it appears, for Nicks.

How many times do you suppose Nicks has sang Dreams throughout her career? Hundreds, for certain, maybe even thousands. Yet she attacks the track with the enthusiasm of a freshman. That’s one of the most endearing things about Fleetwood Mac as a band now. They know people come to their concerts to hear the hits, and they are not only happy to oblige, they are happy to really perform (there’s no better example than Fleetwood’s lengthy drums and "screaming" solo during World Turning). Seeing that effort, especially from those who don’t necessarily need to offer it, is a heartwarming thing.

Not to mention Nicks may just be the coolest person alive. Pieces of fabric hung from her microphone stand and her tambourine, which she hit with such vigour it almost became a relevant instrument (I kid). At 71, she still wears fingerless gloves and twirls around whimsically. And during a flawless rendition of Rhiannon, she took a moment to bow. She just went up to the front of the stage mid-song, swung her shawl-covered arms wide, and bowed, waiting for applause that immediately washed over her. That’s the kind of confidence we all need.

Nicks’s voice can’t quite tap into the airy quality it once had, but the richness, texture and power are all still there and all still perfect.

There seemed to be a few sound issues over on Christine’s side of things, however. Her vocals always came in quiet, not that it mattered on Everywhere, a particular fan-favourite that had feet moving and everyone singing along to the earworm chorus, all but drowning Christine out.

Guitarists Finn and Campbell — who both have very impressive resumés as members of Crowded House and Tom Petty and the Heartbreakers, respectively — are wonderful additions to the core group. Buckingham drama aside, both men have an incredible skill set that just seems to mesh well with the other members. Campbell absolutely rips on guitar and Finn has taken on the vocals for some of the most well-known tracks in rock music history and belts them as though he wrote them. (There was also an additional five band members on stage — keys, guitars, percussion and two backing vocalists).

Mid-set, Finn slipped in a Crowded House track, Don’t Dream It’s Over, with Nicks offering some vocals as well. It was a sweet moment that continued on into a stunning rendition of the stripped-down Landslide, which Nicks dedicated to the Winnipeg crowd, apologizing for cancelling the show in April because she was "really super sick."

Fleetwood Mac rounded out the 120-minute main set with upbeat-jam Go Your Own Way, returning to stage for a two-song encore of Don’t Stop and a cover of Tom Petty’s Free Fallin’, which was accompanied by a slideshow of photos of Petty with Campbell, Nicks and numerous other performers.

Whether Fleetwood Mac will ever tour the world to the same extent again is anyone’s guess, but if Thursday night’s show was proof of anything, it’s that they are more than capable of continuing if they choose to.

To use their own sentiment, tomorrow might even be better than before. 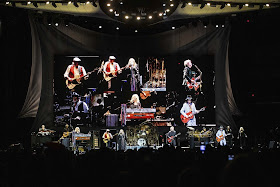