Stevie Nicks has released the powerful rock ballad “Show Them the Way.”

Stevie Nicks has released the powerful rock ballad “Show Them the Way.” This is Nicks’ first new solo song since releasing her 2014 LP 24 Karat Gold. 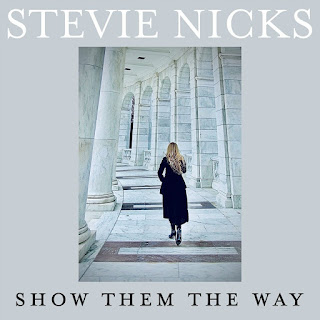 Greg Kurstin produced the anthemic new track. Two official versions have been released: an acoustic, piano-only take and a full-band recording that features Dave Stewart on guitar and Dave Grohl on drums. Citing Martin Luther King Jr., John Lewis and John F. Kennedy, Nicks looks for guidance from great leaders while looking to the future. The song is inspired by a real dream Nicks had where she was playing a benefit in the Hamptons, preparing herself to sing for the likes of MLK Jr., Lewis and the Kennedys. “Someone said, ‘Sing us a song, there’s a piano’/And handed me a drink/The room was full of hope/A song would set them free,” she delivers on the vivid tune.

In an interview arriving at a later date, Nicks revealed to Rolling Stone that she had originally penned the song in 2008. She was in St. Charles, Illinois editing a concert film at the time and returned to the house she was staying in to flip through the TV channels. Over the course of the two months that she lived there, she ended up watching several historical documentaries about the same figures that inspired “Show Them the Way.”

“I watched it all,” she tells Rolling Stone. “Then, what happened was, one night I went to bed and I had this dream. I dream a lot, but I almost never remember the dreams. I’ll wake up and I’ll go, ‘I remember a train with some people smiling and waving at me that went by really fast,’ and that’s it. This dream was so really real that there was a little bit of me, for a minute, when I sat up was like, ‘Did that just really happen?’ So I wrote it down just in prose. I didn’t write it down in a seven verse poem. I wrote down what had happened.”

Towards the end of “Show Them the Way,” Nicks meets a shadow who represents her mom, who worked at a prisoner of war base outside of Phoenix. The figure reminds her: “Don’t forget what we were fighting for,” a quote the singer’s mother had repeated throughout her life.

She considered putting “Show Them the Way” on her 2011 album In Your Dreams, but had presented it to her collaborators at the time too late. “I said, ‘OK, I totally get it, and it really doesn’t go with the rest of these songs, it would be an outlier on this,'” she explains, adding that she wanted it to feel like the right time for the song to be out in the world. “I think the world is calling for it right now.”

Later this month, Nicks’ 24 Karat Gold concert film will screen at select cinemas and drive-ins for two nights only.